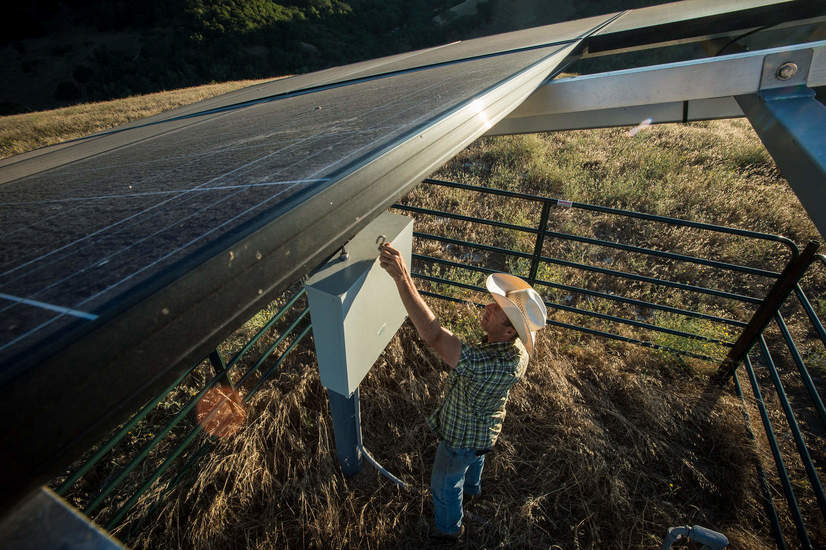 The language and culture of the Upper Nicola Band honor the natural laws of the tmixw — “that which gives us life.” One tmixw is the sun, which shines for more than 2,000 hours annually in much of the band’s traditional territory in B.C.’s arid Okanagan region.

Plans are afoot to harness the sun’s power to build B.C.’s largest solar farm on the band’s Quilchena reserve, a project that would create enough energy for 5,000 homes and deliver up to $4 million in annual revenues to the First Nation community.

The farm would be 15 times the size of Kimberly’s SunMine solar installation on the site of a former hard-rock mine, currently the largest solar project in the province.

“We wanted to showcase something positive for the environment,” Chief Harvey McLeod told DeSmog Canada.

“Our members will go by and see this and know we are contributing to a cleaner, greener planet. We’re not destroying anything; we’re using the resources given to us by the Creator.”

Solar has been slow to take off in B.C., even though the province receives more annual sunshine than Germany, a country at the forefront of the global solar revolution.

B.C. homeowners can install solar panels through BC Hydro’s little-known net metering program, but solar farms are almost non-existent in the province at a time when they are proliferating around the world, including in countries like the United Kingdom, not typically known for its sunny days.

The U.K. now has almost 12,000 MW of installed solar capacity, the majority from solar farms. By comparison, B.C. has a total generating capacity of about 16,000 MW, mostly from large dams.

Jae Mather, executive director of Clean Energy BC, said the price of solar has plummeted by almost 20 percent in the past year alone.

Typical rooftop solar installations on European warehouses are each capable of generating 1 MW of power, and solar farms can produce far more electricity, Mather said in an interview.

“If you compare it [the Upper Nicola solar farm] to the world it’s actually not that big at all.”

“Hundreds and hundreds of megawatts of solar farms are going up in Ontario right now. It’s big for B.C. but still quite small for the world.”

Mather said investors are keen to build solar farms in B.C., but it’s virtually impossible right now to get a commitment from BC Hydro to buy the electricity.

“Until you get an Energy Purchase Agreement (EPA) nothing really matters when it comes to energy.”

“You can have every permit in the world, have huge amounts of money spent, have every tick on every box, but until the EPA is issued nothing matters.”

The story of how the Upper Nicola Band managed to leverage an EPA for its precedent-setting solar farm began almost 10 years ago, when BC Hydro approached the band and said it wanted to twin a major transmission line — the Interior to Lower Mainland transmission line — through its traditional territory.

Prolonged negotiations ensued, and the First Nation said it would consent to the line on a major condition.

The band wanted to develop a “clean and green” power project and BC Hydro had to agree to buy the power — not a straightforward proposition considering that B.C. has a power surplus, demand has been flat for more than a decade despite a population surge and a decision to proceed with the $10.7 billion Site C dam has chased some renewable energy projects out of the province.

“We had a lot of negotiations,” the chief recalled. “And part of the compensation was a 15-MW project. We included that as one of the terms.”

“We see it as really beneficial for us to get engaged in clean energy. This was one of our priorities. It had to be clean, green energy. And we had some alternatives. We looked at geothermal, we looked at wind and we eventually settled on solar.”

A solar installation could be built on reserve land, for everybody to see, and for the band to own and control, said Chief McLeod.

But before the Upper Nicola Band could build a power project, it had to find the right business partner. In August 2016, the band selected Fortis, a company many British Columbians associate with natural gas.

Fortis is also a leading electricity provider, with more than 80 percent of its $48 billion of Canadian and U.S. assets in the electricity sector. One Fortis company owns Tucson Electric Power, which has extensive experience in solar installations.

“They bring the land, they bring the EPA, they bring some labor, and we bring expertise on the solar technology itself and a long-term interest in ownership,” he said in an interview. “We’re all very excited.”

Bierlmeier pointed out that the Upper Nicola Band solar project is moving forward even though the independent power industry “is having challenges getting contracts to sell power to BC Hydro,” largely due to an electricity glut.

“The short answer is no, BC Hydro doesn’t need the power from this particular project,” said Bierlmeier.

“The bigger answer and the more complete answer is ‘yes, they need the power.’ The cost of getting [power] from northeast B.C. to the Lower Mainland is to do this accommodation with the Upper Nicola…to buy power from a renewable project of their selection.”

“So it’s the cost of the Interior to Lower Mainland transmission line.”

The twinning of the transmission line took place as the former BC Liberal government forged ahead with plans to build the Site C dam on the Peace River, and also made plans to shut down Burrard Thermal, a natural gas-fired plant in Port Moody that was on standby to provide electricity to the Lower Mainland.

‘We Have to Move into the Future’

The new $743 million line transmits power from large dams on the Columbia and Peace rivers. It crosses mountains, grasslands, major rivers and highways, and runs “right through the middle of our territory to Vancouver,” explained Chief McLeod.

He said the Upper Nicola Band is now deeply engaged in discussions with the province about putting solar panels on band buildings and homes and investing in wind and geothermal energy, in addition to the solar farm.

The chief sees benefits from clean energy projects aside from revenue, including training opportunities and renewable energy careers for some of his people, instead of shorter-term jobs in the boom and bust resource sector.

“We have to move into the future,” explained Chief McLeod.

“Water is getting more scarce, there’s going to be less of it. We have to look at alternatives [to hydro] and at the same time protect our environment.”

Earlier this month, BC Hydro announced plans to “pursue negotiations” for electricity purchase agreements with five “small and micro” renewable energy projects led by First Nations, including a one megawatt solar power project led by Tsilhqot’in National Government near Hanceville.

Energy Minister Michelle Mungall said in a press release that, “moving forward with the development of these energy projects is a step in the right direction in creating opportunities for First Nations in the province, while also contributing to B.C.’s clean energy future.”

Mather said Clean Energy BC is happy the First Nations-led projects are progressing.

“It’s wonderful for everyone involved. It’s really important for reconciliation, for local economic development and for more clean energy in the marketplace.”

But he said the “rest of the queue” for clean energy projects in B.C. is “not moving forward.”

Upper Nicola Band members will vote in April on whether to set aside 400 hectares of their Quilchena reserve for economic development projects, half of which would be allocated for the solar farm.

Pending approval from band members, a solar farm final investment decision will be made by the end of the year, and construction will take four to six months.