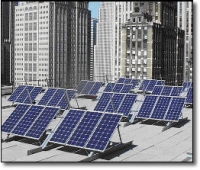 Debate on a comprehensive energy bill that stretched from Thursday into early Friday morning in the U.S. House of Representatives has resulted in the inclusion of several programs that could benefit the solar energy industry.

Washington, D.C. – April 11, 2003 [SolarAccess.com] Included in the bill that now moves to a conference committee to resolve differences with the Senate version, is: – A provision sponsored by Rep. J.D. Hayworth (R-AZ) to provide homeowners with a 15 percent tax credit for the purchase of residential solar electric and solar hot water systems, capped at US$2,000 per system. Similar legislation is moving in the Senate and is part of the Bush Administration’s budget. – An amendment offered by Rep. James Oberstar (D-MN) to authorize a five-year, US$262 million per year Photovoltaic Energy Commercialization Program to deploy solar electric systems on federal buildings. The amendment passed by voice vote. – A provision sponsored by Rep. Lynn Woolsey (D-CA) to authorize a four-year, US$30 million per year program to cost-share deployment of solar and other Renewable Energy systems on state and local public buildings. – Model net metering and interconnection language that states would consider to make it simple for solar and other distributed clean energy technologies to connect to the utility grid to sell their excess generation to their local utilities. Chairman Joe Barton (R-TX) made this provision possible. “These historic provisions, if signed into law, will significantly improve the quality of our air while driving down the cost of solar systems,” said Glenn Hamer, executive director of the Solar Energy Industries Association (SEIA). “Today we are seeing a bipartisan effort to speed the deployment of solar systems across America. This is welcome news for our environment and for our nation’s energy security.” According to SEIA, the Oberstar amendment has been in the works by his office for more than a decade, during which the plan has historically been rejected when presented. On behalf of the solar energy industry, Hamer is calling for support of these provisions. “While we expect some changes to occur when the energy bill goes to Conference,” he said “we urge the Senate to join the House in supporting these historic provisions.” Peter Carvelli can be reached at peter.carvelli@solaraccess.com