More
Home Blogs Ground-truth: Do We Need To Destroy the Desert To Fight Climate Change?

There are two holes the size of bulldozers in the argument made by Johanna Wald in “Clearing Up the Record on Solar Energy on Public Lands“, that opening public lands to large scale industrial solar development is a necessary “sacrifice” to fight climate change (see similar arguments from The Wilderness Society and Climate Progress).

First, I’m reminded of a remark made by an energy attorney friend who has fought destructive uranium, coal and oil and gas energy development for almost 30 years, that…”solar is just like any other industrial energy development”.  He was right. 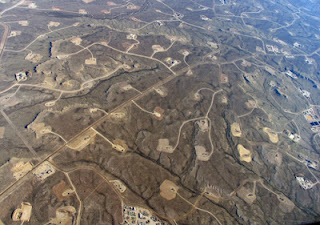 Oil and gas development has site specific well pad surface impacts, but enormous below ground, water and air quality/climate impacts.  Industry has, over the years, reduced surface impacts (at least in theory, if not practice) by drilling multiple wells from a single well pad and spacing them out.

Industrial solar impacts 100% of the surface for literally square miles (see the photo of the first phase construction for BrightSource/ISEGS below).  Power tower technology also has significant bat/avian impacts as the towers can be over 650-feet tall (that’s nearly as high as the tallest skyscraper in Denver).  Visit the Basin and Range Watch website to see more images of what industrial solar development really looks like.

But the bottom line is this: Both oil and gas and industrial solar destroy functioning ecosystems and millions of acres of our public lands are being offered to industry for both forms of energy extraction. 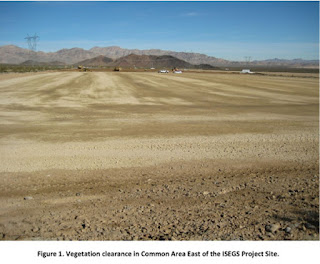 Many unproven assumptions underlie arguments in favor of industrial solar; For example, that it will reduce carbon emissions and slow climate change.  Yet, no life-cycle analysis has been conducted to quantify construction emissions, transportation, transmission/SF6, lost carbon sequestration values and other large-scale cumulative impacts.

The truth is, we don’t know.  But some scientists are beginning to question the massive footprint of industrial solar (See Big Solar’s Footprint and Allen, et al.).

Many people, even those you would expect to know better, believe deserts are inhospitable places that support little life.  It will come as a surprise that our southwestern deserts are among the most species-rich ecosystems in the US, and, according to a recent report by the Endangered Species Coalition, among the most threatened by climate change.  (Desert soils are also very good at sequestering carbon). 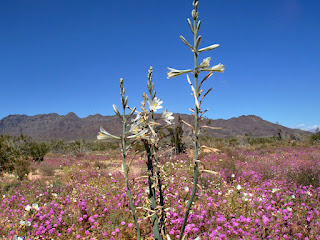 Not surprisingly, industry supporters have worked hard to downplay the impacts from big solar and the value of deserts.  Also, tremendous political pressure has greased the fast-track wheels for dozens of massive solar and wind developments.

They’ve gotten away with it because nothing on this scale had ever been built before.  But as construction on solar projects in California proceeds, (they are still years away from generating any actual electricity), we are beginning to see the reality.

The Los Angeles times report, “Sacrificing the desert to save the Earth” is among the first to expose the emerging story that impacts from industrial solar projects are likely to be much worse than “predicted”.

For example, desert tortoise abundances on the 5.6-square-mile BrightSource/ Ivahpah site were exponentially higher – more than 750 – up from the original estimate of 32.  After project approval, the Bureau of Land Management (BLM) had to acknowledge that more than 3,300 endangered desert tortoises would be killed or relocated (with low survivability) as a result of a single project.

The deadly distemper virus was recently introduced, possibly by workers trying to force kit foxes off the land before grading operations could begin on the 2,000 acre Genesis Solar Power Project.  If it spreads, the disease could threaten kit fox populations throughout the Chuckwalla Basin or beyond.

While “ground-truthing” on big solar is just getting under way, over 15 projects on 35,000 acres have been approved, and more are on the BLM priority fast-track.   If allowed to go forward, the DOE/BLM solar industrial plan could impact millions of acres of intact, ecologically valuable public lands and render our southwestern deserts a fragmented wasteland. 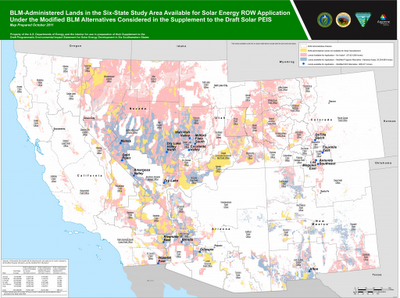 In a somewhat shocking move, NRDC, The Wilderness Society, The Nature Conservancy and others signed a joint letter to BLM with industrial solar developers, including BrightSource, NRG Solar, Pacific Gas and Electric and SolarReserve, protesting the limitations of the same Solar Energy Zone’s(SEZ’s) these environmental groups are claiming will help industry avoid environmentally sensitive areas (Also see Mojave Desert Blog).

As the widely touted recent Colorado College Survey reminds us, a majority of Americans want public lands to be protected even if it means fewer jobs.  Until proven otherwise, public lands defenders have to assume it applies to all extractive energy development, including industrial solar and wind.

The rational for destroying more public lands does not hold up, especially given the second big hole in Ms. Wald’s logic.   And that is her failure to acknowledge that point of use distributed solar has already scaled up faster and more cheaply than industrial solar.

Much of the developed world has surged ahead of the US without sacrificing its open-space, productive farmland or intact ecosystems.  For example, little cloudy Germanyinstalled 3 GW (3,000 MW) of solar PV in December of 2011 alone, while the US only installed 1.7 GW (1,700 MW) in all of 2011.  And Germany was able to do it at half the cost of solar PV in the US.

Over half of Germany’s renewable energy is owned by citizens and farmers, not absentee utility companies and corporations. The gains in efficiency, local jobs and energy savings are much greater when solar and wind are distributed more democratically.  (See Community Power, by Al Weinrub for a good overview on the superior community benefits of local DG). 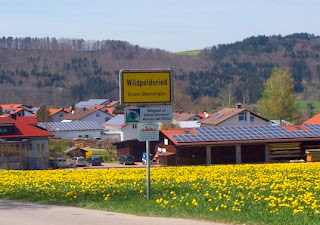 Just as Germany, Belgium, France, Spain, Czech Republic, Italy, China, Japan and India are doing, the US could install thousands of Gigawatts of solar PV in the vast urban landscapes already devoted to human needs.   What is lacking in the US is the adoption of proven policy incentives like Property Assessed Clean Energy (PACE) and German-style feed-in-tariffs (FIT).  (See Climate Progress for a good overview on the power of FITS).

Remote central-station solar requires years, or even decades to permit and build, and requires costly new transmission that is highly inefficient (7-12% line losses).  It also commits us to a path-dependency that could preclude taking the more desert-friendly, efficient and cost-effective distributed path.

One has to wonder why NRDC and other industry-friendly environmental groups cling stubbornly to a misguided policy that is in direct conflict with their purported mission to protect the environment.  Could the answer lie in the fact that current board members and former influential players (like R.F. Kennedy, Jr., John Bryson and Carl Pope) are themselves heavily invested in these projects?

Isn’t it time to focus on proven policies that cash in on the 60% efficiency dividend and generate the energy where its used rather than fueling an increasingly divisive and confusing policy of advocating for the unnecessary destruction of our public and other valuable undeveloped lands?

The curious case of the Cumbrian coal mine: UK decision stuns...

The first rule of connecting DERs: Keep it simple