Despite on the ongoing financial tragedy that has gripped Greece for the past three years, the country has risen Phoenix-like from the ashes to become one of the world’s largest markets for solar photovoltaics (solar PV).

According to data compiled by the Hellenic Association of Photovoltaic Companies (HELAPCO), Greeks installed more than 900 MW of solar PV last year, bringing total installed capacity to more than 1,500 MW. 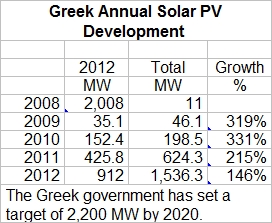 Both in relative and absolute terms Greece has become a world leader in solar energy development. The country now ranks third in solar PV per capita worldwide, behind only Germany and Italy.

As in Germany and Italy, the world’s two largest markets for solar PV, Greece uses a system of feed-in tariffs. The Greek feed-in tariff program has revolutionized solar development in the country. Nearly one-fourth of all solar PV capacity in Greece has been installed in small rooftop systems. 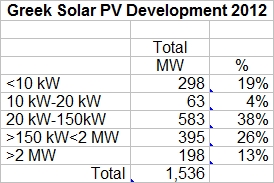 The solar association notes that rooftop systems, regardless of size, no longer require environmental permitting. Permitting has been streamlined for ground-mounted systems as well.

The solar association says that “practically every bank in Greece now offers up to 100% financing for the installation of residential PV systems.” As proponents of feed-in tariffs have noted elsewhere, when the tariffs are well designed there’s no need for complex loan programs, such as PACE grants. Banks will step in because the revenue streams from the feed-in tariffs are predictable.

“Any citizen,” says the association, “who wants to install a solar system with a capacity of up to 10 kilowatts on their roof, can do so easily, simply by visiting the local electricity company office.”