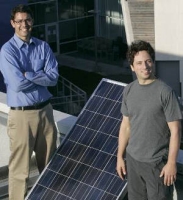 Pasadena, California [RenewableEnergyAccess.com] Last Monday, Google announced plans to install a 1.6 megawatt (MW) solar array on its headquarters in Mountain View, California. The project calls for more than 9,000 Sharp solar panels, which will be installed on rooftops and parking lots at the Googleplex.

The announcement is another huge step for the solar industry, proving that solar is becoming a more mainstream energy resource. As high profile businesses make the decision to invest in solar, other companies often see the value in such a move.

“Having Google come out with such a large project is quite significant and helps set the stage for what is possible and what is to come in California and around the U.S.,” said Bernadette Del Chiaro, Clean Energy Advocate for Environment California.

Most of the panels will be placed on the rooftops of some of the buildings in the Googleplex. The other solar panels will double as shaded parking in existing Google parking lots. The installations will provide about 30% of the company’s electricity during peak demand.

“When the project is completed this spring, Google employees, shareholders and the community around us will begin to enjoy the environmental as well as economic benefits of clean, renewable energy generated onsite,” said David Radcliffe, vice president of real estate at Google.

All of the panels are provided by Sharp Electronics. Ron Kenedi, vice president of the Solar Energy Solutions Group at Sharp Electronics said, “We are particularly delighted with the extensive use of Sharp’s cutting-edge technologies in this project as they’re a natural match for companies looking to effectively generate green energy.”

“It is a distinct pleasure to be involved with a company such as Google, which is committed to investing in alternatives to traditional fuel sources,” said Andrew Beebe, president of EI Solutions. “Their understanding that solar electricity can provide tangible environmental benefits in an economically sound manner should be a model for other companies in California and throughout the U.S.”