Describing the development as the first such decrease since the third quarter of 2011, the report, “The World Market for PV Inverters – 2013 Edition”, finds that PV inverter shipments in the second quarter of 2013 amounted to 8.3 GW, compared with 8.7 GW of capacity shipped in the equivalent quarter of 2012.

The main culprit for the decrease in PV inverter shipments was the sharp slowdown in the European market, IHS believes, with shipments in the Europe, Middle East and Africa (EMEA) region during the first half of 2013 falling more than 40 percent compared with the first half of 2012. As a result, the region accounted for only 6 GW of capacity this year compared with the 10 GW seen over the equivalent period of 2012.

“The pace of contraction for inverter shipments in critical European countries such as Germany and Italy has been faster than expected, with some of these markets seeing their demand decline by more than 70 percent this year,” said Cormac Gilligan, senior PV market analyst at IHS. “Some inverter suppliers have been very reliant on these historically large markets. Because of this, inverter suppliers are seeking new markets and have expanded their presence internationally in high-growth countries, including the United States, China, Japan and India.” 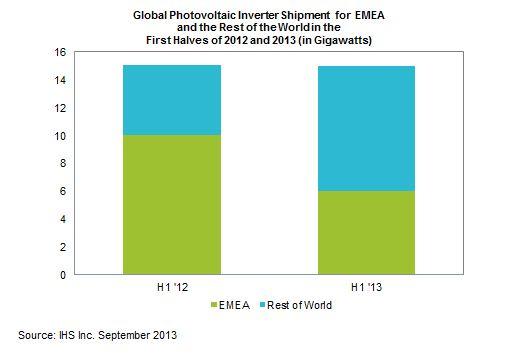 Despite the quarter-by-quarter annual decrease, shipments in fact grew on the previous quarter, rising by 24 percent. IHS suggests this large growth in quarter-to-quarter shipments was largely accounted for by China, where inverter shipments increased by 174 percent in the second quarter of 2013 to reach almost 2 GW. The surge was powered by a rush to complete projects aided by China’s Golden Sun programme.

“Although China’s inverter shipments nearly tripled during the second quarter of 2013, the country’s inverter market is still dominated by domestic suppliers,” Gilligan added. “China remains a challenging market for Western suppliers to penetrate despite its size. Average inverter prices have decreased by 14 percent in the second quarter of 2013 to reach as low as US $0.07 per watt, which means that inverter suppliers really need a local presence in order to have competitive pricing in this market.”

Furthermore, the analysis also indicates that average inverter prices have continued to decline, dropping by some 10 percent in the second quarter of 2013. This decline was the result of inverter shipments shifting to lower-cost markets in Asia and continued price erosion in mature solar markets, the report says. Total revenue decreased by 18 percent year-on-year in the second quarter of 2013 to $1.6 billion, IHS adds. 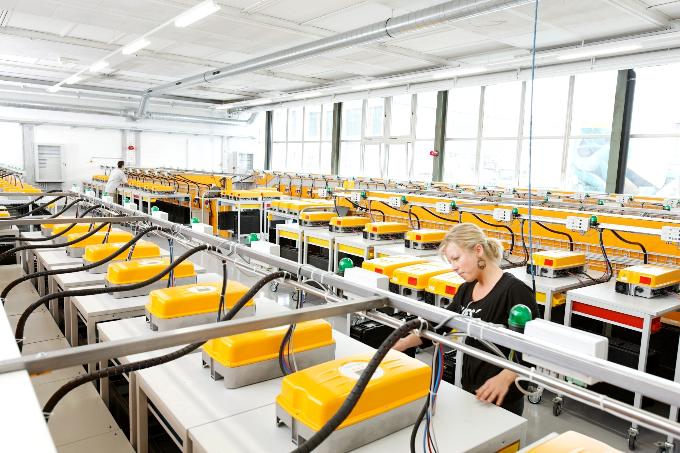 Considered on a geographical split, European inverter revenue fell by more than 50 percent in the second quarter of 2013, with markets such as Germany and Italy suffering revenue declines of more than 60 percent, the report notes. These decreasing European revenues have severely impacted the market share of domestic inverter manufacturers on the continent, which traditionally have been dependent on a few European markets. As a result, in the second quarter of 2013, only three European inverter suppliers ranked among the top 10 in terms of market share, IHS states, half the number of last year.

Expanding on the market influences, Gilligan said: “Delays in gaining inverter certification for individual PV markets, decreasing revenues and difficulty in establishing a presence in new markets have posed significant challenges for the entrenched inverter suppliers from Europe. The problem of decreasing revenues is further exacerbated by new market entrants, such as Chinese suppliers in Europe, and by the very competitive inverter prices in an already very crowded domestic market.”

Nonetheless, looking ahead, the IHS analysis does see some cause for optimism, with inverter shipments expected to increase in the second half of the 2013 to reach more than 34.5 GW for the full year.

However, IHS predicts that the majority of inverter demand is forecast to come from the Americas and Asia, which will continue to put further pressure on inverter suppliers that do not have a strong presence in these markets. “Owing to this market shift, inverter suppliers – particularly Chinese and Japanese firms such as Sungrow, Omron, Tabuchi and TMEIC – are expected to increase their market share substantially in 2013 at the expense of some of the European suppliers,” the report concludes.