New Hampshire, U.S.A. — Global PV installations soared 40 percent in 2011 to 27.4 gigawatts (GW) as sluggishness in the first half of the year swung to a scramble to complete projects before incentive programs expired or get rewritten, according to NPD Solarbuzz. (That’s pretty close to what European Photovoltaic Industry Association (EPIA) had earlier calculated 27.7 GW in global grid-connected PV in 2011, with six regions topping 1 GW of capacity: Italy, Germany, China, USA, France, and Japan.) 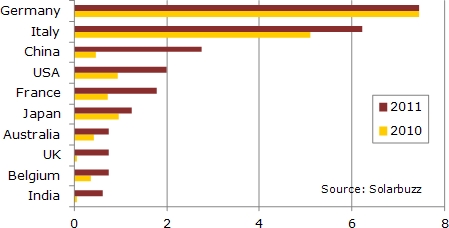 The outlook for 2012 calls for “rest of world” markets to make up a third (32 percent) of global demand, up from just 20 percent of demand in 2010. Europe’s marketshare will continue to slip, to 53 percent in 2012. “Aggressive cuts in incentives in Germany and other European countries have set up the potential for a global market decline in 2012,” pointes out NPD Solarbuzz president Craig Stevens. So now “the rush to install is on, especially in Germany” where cuts to incentive schemes “will force companies to embrace self-sustaining marketing models earlier than they expected.” China, meanwhile, needs to decide whether it will strengthen its own incentives to stimulate its domestic PV market and support its PV manufacturing base, he added.

On the manufacturing side, look for suppliers to preserve what little margins remain by reining in manufacturing even more all across the supply chain, from polysilicon to wafers to cells. Stevens points out that polysilicon, which historically has been the most constrained and enjoyed the most profits, now finds itself with the most capacity anywhere in the PV supply chain, a recipe for lower margins.

Over the next five years, look for Europe’s market to keep shrinking, on its way to just 42 percent by 2016 — by which time China alone could take up 17 percent of the world’s demand. Also expect factory-gate module prices to keep sinking fast. Solarbuzz calculates another 29 percent drop in pricing for 2012, and overall a 43-53 percent decline from 2011 to 2016.