New Hampshire, USA — Slumping solar PV equipment spending has finally bottomed out, and we’re about to witness a “revival” in investments that will finally close the yawning gap between oversupply and demand, according to a pair of analysts reports.

Solar PV manufacturers spent nearly $13 billion in 2011, but then their investments plunged more than 70 percent to $3.6 billion in 2012, and will probably drop another 36 percent this year to $2.3 billion, the lowest level since 2006, says Jon-Frederick Campos, analyst with IHS Solar. But with prices showing signs of stabilizing, companies that idled manufacturing lines and lowered utilization, and put off expansions in the last 12-18 months, are adding new plants and production capacity in emerging markets where some of the best growth is happening: Middle East to Africa to Latin America, he said.

Two signs Campos has seen over the past six months that indicate reached the bottom of PV investments: “average selling prices, though still not completely favorable, have been stabilizing and have actually shown increases thus far in 2013,” he said. And second, he points to improved forecasts and stronger financials from PV companies, thanks to improving market conditions. “The rest of 2013 and early 2014 will eliminate much of the overcapacity still out there.”

Ed Cahill, research associate at Lux Research, isn’t exactly so optimistic, saying we haven’t actually reached the bottom yet: “It’ll be worse next year, when a lot of consolidation will happen,” starting with the vertically integrated manufacturers who are most exposed to price pressures across the board. But like Campos he sees demand going up and supplies going down over the next couple of years, with prices rising and profits reemerging. “When will those two match up? We see it in 2015,” when capacity dips to 58 GW, and demand surges to 52 GW. (He clarifies that roughly a 12 percent overcapacity beyond demand is “a healthy amount” that provides a cushion for manufacturers; after 2015 that buffer could shrink down to 5 percent and create what he calls a “supply-constrained” environment in 2016.) Total demand is seen reaching 62 GW by 2018, led by China (12.4 GW of installations) and the U.S. (10.8 GW). Those numbers assume “multiple large movements within the market,” from new financing models for distributed solar projects, to governments fast-tracking utility-scale project development in emerging markets, and shutting off government support for smaller and struggling manufacturers.

Both Campos and Cahill think crystalline silicon (c-Si) will continue to dominate the solar PV market and that’s where the real gains will be seen to further lower costs. Improvements continue to be made all over the module bill-of-materials, from the starting wafer material (direct solidification, epitaxial silicon, and quasi-mono silicon ingot) to structured saw wires, selective emitters, rear passivation, backside contacts, metal wrap-through, and anti-reflective coatings. Small improvements in specific areas can add up; just ramping utilization back up to 90 percent should save manufacturers $0.09/W, Cahill notes. “Capacity-boosting investment is what got the industry in trouble,” Campos adds. “Technology and process step-up investments are the key to our industry’s continued revival.” 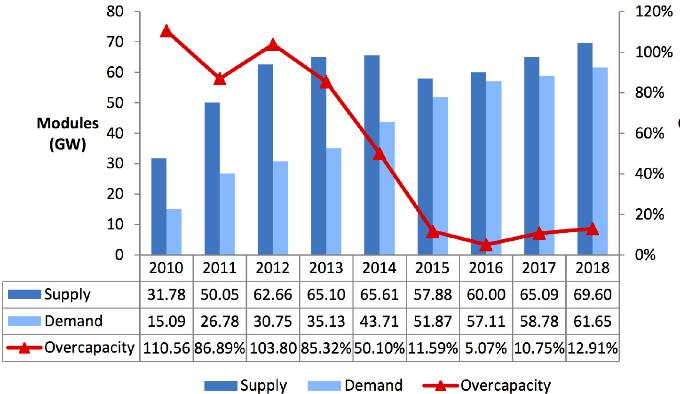 Increasing demand and decreasing capacity lead to the market’s return to equilibrium in 2015. (Source: Lux Research)