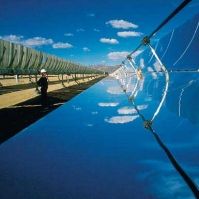 Vienna, Austria [RenewableEnergyAccess.com] A study by the German Aerospace Center estimated that harnessing the sun’s energy falling on just 6,000 square kilometers of desert in North Africa would supply energy equivalent to the entire oil production of the Middle East of 9 billion barrels a year.

The study calculated that solar thermal power plants could supply 68 percent of North Africa’s as well as Europe’s electricity by 2050.

One company planning to take advantage of this untapped potential is Flabeg, a German-based manufacturer of parabolic trough mirrors for solar thermal power plants. The company recently developed a mirror that can reflect 93 percent of the sun’s rays.

The improved mirror can concentrate 99% of the sun’s radiation onto an absorber tube with a diameter of 70 mm or less.

Flabeg said that it expects to sell its high precision mirrors in Spain and North Africa as the solar thermal power plant market starts to take off in Europe.

The company is set to deliver 210,000 of the high precision mirrors to the 50 megawatt (MW) solar thermal power plant Andasol II, in Spain—the biggest in Europe—by the end of June 2008.

“We increased the reflectivity of our mirrors by using better raw glass quality,” Thomas Deinlein from Flabeg told RenewableEnergyAccess.com. “The more transparent the glass, the higher the reflectivity value. We use an extremely transparent, white type of glass.”

It is estimated that a 50 MW solar power plant can generate 5 million kilowatt-hours more of electricity for every extra 1 percent of sunlight that is collected by solar mirrors.

Europe’s first commercially operating solar thermal tower plant went into operation in Sevilla, Spain generating 11 MW of electricity in April. Plans are in place for building more solar power plants able to generate a total of 300 MW of electricity, enough to supply the city of Sevilla.

In addition, the German Aerospace Center has built an experimental solar thermal tower power plant in Julich, Germany, that is due to come into operation in 2008 and that will be able to generate 1.5 MW of electricity.

In Julich, 16,000 m² of mirrors will track the sun and concentrate solar radiation onto a tower to heat up the air, generate steam and drive a turbine.

The Julich plant will be used to test solar thermal tower power plant technology with a view to developing prototypes for 10 to 50 MW power plants that can be built in South Europe and North Africa.

The German Aerospace Center plan envisages building solar thermal power plants of between 50 and 200 MW in size in different locations across North Africa. Cables to transmit electricity from North Africa to Europe have already been built under the sea.

If this vision becomes a reality, it is estimated that North Africa can produce 2 to 3 times more solar thermal electricity than Europe.

Jane Burgermeister is a freelance writer based in Vienna, Austria.