More
Home Solar Germany and California: Changes leave the devil in the details 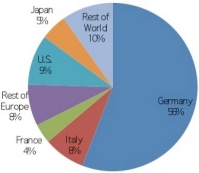 Analysis of changes in Germany’s FiT and possible cap, and California’s promising yet complex net excess and FiT programs, shows that the devil may well be in the pesky details, and could lead to more than one down year for the solar industry, explains Navigant Consulting’s Paula Mints.

The new German governing coalition is promising (or threatening) a steeper cut to the country’s EEG tariff along with a possible cap, and soon — perhaps before this article is even published. Meanwhile, California finally passed a bill that will allow solar system owners (residential and small commercial) to either be paid for their net excess or roll it into the next year, instead of losing it. A bill authorizing a FiT for California also passed for systems ≤3MWp. The details about changes in Germany’s FiT and California’s new programs are not completely worked out — and the devil may well be in those pesky details.

One thing is for certain — should the German FiT be reduced significantly (guesses abound from 15% to 30%), the market would reduce with it, perhaps significantly. Should the government implement a cap on the program, the market could conceivably shrink even further. Meanwhile, nuclear power in Germany has been given a boost. A significant change in the German incentive for solar is troubling because Germany is currently the only market ready to accept >1MWp of product a year; other markets, including the US, are still in a nascent stage of market development and need more time. As the figure at right indicates, a significant change in the market in Germany would lead to an extremely soft market in 2010.

After the recent parliamentary elections in Germany installed a conservative government, the PV community expected a change was coming. The recession had pushed the German population to the point of change, much as in the US. However, while a desire for change pushed US voters to the left, German voters chose a different direction.

The German government appears to be acting quickly to change the EEG. While optimistic PV observers expect significant changes, they also presume these changes would not take place until 2011, giving the PV industry one more year of heavy selling along with the chance to build up new markets, such as the US. Pessimistic PV observers fear that changes will happen much sooner. Now, some degree of optimism remains; even if it is soon, the change cannot possibly be too dire — and how could a significant change take place with such a large German PV industry, not to mention the EU 20/20/20 target?

Optimism and pessimism aside, there is currently a genuine and significant pushback from German voters whose utility bills pay for the EEG, along with a degree of anger that it has created not just a strong German manufacturing industry but also thriving industries in other countries. Chancellor Merkel has made it clear that the EEG, long viewed as a 20-year annuity for system owners, is expensive to support and will be rethought. Meanwhile the entire industry awaits the expected outcome and at this point, a 15% digression in January 2010 without an accompanying cap would be a relief to many.

Again, there are currently no markets for solar that are developed to the degree that Germany could be replaced — much as Spain’s market could not be replaced. Japan, even with its announced FiT, will not be a gigawatt market in 2010 and likely not in 2011. The market in China remains a wait-and-see proposition. The US has strong potential and a lot of pesky details to be worked out before its potential is fully realized.

Right now other governments (and not only in Europe) are watching to see how Germany changes its FiT, and what reasons it gives for the changes. Italy, Greece, France, and even the US may well consider making changes to their national programs if Germany — the global leader and parent of the FiT model, is too negative in its response.

The new net excess and feed-in tariff bills passed in California are significantly less fuzzy in detail than the uncertainty in Germany. In California, complexity is the issue. California is not the only US state with a solar market, nor is it the only state with incentives and an announced FiT. However, California remains the boldest US state with regards to breaking the barriers that could really drive a thriving and globally competitive market for solar in the US California’s legislature and governor are poised to make more changes in early 2010, hopefully before pre-election anxieties induce legislative hesitation to act. The state’s current Democrat-heavy government and its independent governor know that they need to take action now, just in case the next governor is an ultra-conservative Republican. For one thing, in order for California’s new bills (FiT and ownership of net excess electricity) to have a long-term impact, the state’s 2.5% net metering cap needs to be raised.

A cause for celebration is California’s elimination of the net excess penalty — that is, for systems <1MWp, the net excess must either be purchased by the utility or rolled over to the following period. Soon there will be no more ‘use it or lose it’ in California, which should stimulate strong interest in rooftop residential and small to medium commercial solar. Interconnections will also be processed faster — the bill calls for 30 days from receipt of a completed application. The price the utility must pay for the electricity has not been set, but aside from the market price referent (MPR, ~13¢/kWh) that utilities have set for renewables, it must reflect the value of the RE generation, and, the value of the pollution that has been offset. The legislation favors distributed generation, and should encourage development of new business models for the residential and small commercial market.

More good news: California will have a feed in tariff for systems <3MWp. The price utilities must pay for electricity for a 10-, 15-, or 20-year period (to be defined) is the California PUC’s MPR, including “all current and anticipated environmental compliance costs.” The bill authorizes the PUC to adjust the payment to reflect time of electricity delivery. California’s FiT will be available to system owners or operators within a utility’s territory on a first come first served basis until the utility meets its share of the 750MWp or the utility’s above-market-cost limitation has been met or exceeded. For California’s FiT there will be studies and likely quite a bit of traffic to and from the PUC by the strong utility lobby not to mention PV industry interest groups and lobbies. In the timeframe before this particular bill is enacted, much nebulous language needs to be worked out.

Despite the good news from California’s legislature and governor, the changes in Germany could lead to more than one down year for the solar industry. The best-case scenario would have Germany announcing changes for 2011, giving markets in Japan, the US and other countries in Europe time (though not much) to develop. In the worst case, swift and drastic changes in Germany’s FiT will leave an unprepared industry with even more overcapacity and no time to react. (No matter the dire effect of losing Spain as a primary market, the industry was given plenty of warning.) The lesson for the industry is to aggressively develop new markets while protecting current ones — and unfortunately, there is no getting around the pesky details in either case.