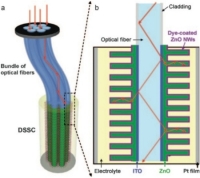 Researchers at Georgia Tech have developed nanostructures on optical fibers in a dye-sensitized solar cell with eventual 7%-8% efficiency, enough for “practical energy harvesting” applications hidden away from rooftops.

November 5, 2009 – Using zinc oxide nanostructures grown on optical fibers and coated with dye-sensitized solar cell materials, researchers at the Georgia Institute of Technology have developed a new type of three-dimensional photovoltaic system. The approach could allow PV systems to be hidden from view and located away from traditional locations such as rooftops.

“Using this technology, we can make photovoltaic generators that are foldable, concealed and mobile,” said Zhong Lin Wang, a Regents professor in the Georgia Tech School of Materials Science and Engineering. “Optical fiber could conduct sunlight into a building’s walls where the nanostructures would convert it to electricity. This is truly a three dimensional solar cell.”

Details of the research were published Oct. 22 in the early view of the journal Angewandte Chemie International. The work was sponsored by the Defense Advanced Research Projects Agency (DARPA), the KAUST Global Research Partnership and the National Science Foundation (NSF).

Dye-sensitized solar cells, which use a photochemical system to generate electricity, are inexpensive to manufacture, flexible, and mechanically robust — but their tradeoff for lower cost is conversion efficiency lower than that of silicon-based cells. However, using nanostructure arrays to increase the surface area available to convert light could help reduce the efficiency disadvantage, while giving architects and designers new options for incorporating PV into buildings, vehicles, and even military equipment.

Fabrication of the new Georgia Tech PV system begins with optical fiber of the type used by the telecommunications industry to transport data. First, the researchers remove the cladding layer, then apply a conductive coating to the surface of the fiber before seeding the surface with zinc oxide (ZnO). Next, they use established solution-based techniques to grow aligned zinc oxide nanowires around the fiber much like the bristles of a bottle brush. The nanowires are then coated with the dye-sensitized materials that convert light to electricity.

Sunlight entering the optical fiber passes into the nanowires, where it interacts with the dye molecules to produce electrical current. A liquid electrolyte between the nanowires collects the electrical charges. The result is a hybrid nanowire/optical fiber system that can be up to 6× as efficient as planar zinc oxide cells with the same surface area.

Wang and his research team have reached an efficiency of 3.3% and hope to reach 7%-8% after surface modification. While lower than silicon solar cells, this efficiency would be useful for practical energy harvesting. If they can do that, the potentially lower cost of their approach could make it attractive for many applications.

By providing a larger area for gathering light, the technique would maximize the amount of energy produced from strong sunlight, as well as generate respectable power levels even in weak light. The amount of light entering the optical fiber could be increased by using lenses to focus the incoming light, and the fiber-based solar cell has a very high saturation intensity, Wang said.

Wang believes this new structure will offer architects and product designers an alternative PV format for incorporating into other applications.

“This will really provide some new options for photovoltaic systems,” Wang said. “We could eliminate the aesthetic issues of PV arrays on building. We can also envision PV systems for providing energy to parked vehicles, and for charging mobile military equipment where traditional arrays aren’t practical or you wouldn’t want to use them.”

Wang and his research team, which includes Benjamin Weintraub and Yaguang Wei, have produced generators on optical fiber up to 20cm in length. “The longer the better,” said Wang, “because longer the light can travel along the fiber, the more bounces it will make and more it will be absorbed.”

Traditional quartz optical fiber has been used so far, but Wang would like to use less expensive polymer fiber to reduce the cost. He is also considering other improvements, such as a better method for collecting the charges and a titanium oxide surface coating that could further boost efficiency.

Though it could be used for large PV systems, Wang doesn’t expect his solar cells to replace silicon devices any time soon. But he does believe they will broaden the potential applications for photovoltaic energy.

“This is a different way to gather power from the sun,” Wang said. “To meet our energy needs, we need all the approaches we can get.”

John D. Toon is manager of the research news and publications office at Georgia Institute of Technology. E-mail: john.toon@innovate.gatech.edu

This article was originally published by RenewableEnergyWorld.com and was reprinted with permission.