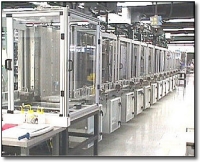 Miasol&eacute, a manufacturer of thin-film solar photovoltaic (PV) cells just secured US$5.4 million in venture funding to help propel commercialization of their solar cells. The company, formerly Raycom Technologies, developed a new manufacturing process for the production of solar cells on flexible stainless steel foil, and believes their technology will enable them to lower the cost of solar-electric power from a current average of $3.00 a watt to less than $1.00 a watt.

San Jose, California – May 12, 2004 [SolarAccess.com] Miasol&eacute’s technology is based on a proprietary vacuum deposition sputtering technology which is used to apply a thin-film of light absorbing semiconductor material composed of copper, indium, gallium and selenium, more commonly known as CIGS. The CIGS material and other thin-film layers are deposited in a continuous process in the vacuum system on stainless steel foil. The company said they are confident their CIGS solar cells offer a direct replacement for conventional silicon based cells, at a fraction of the cost. VantagePoint Venture Partners, one of the largest venture capital firms in the United States, led the financing. “The Miasol&eacute team has the hands-on manufacturing experience that will be necessary to transform this promising technology into a market reality for utility, commercial and residential customers,” said Bill Green, Managing Director, VantagePoint Venture Partners. Miasol&eacute’s management team, led by CEO David Pearce, has extensive experience in the production of high volume thin film components. The team previously developed high volume coating processes for the production of hard disks for the data storage industry and optical components for “fiber-to-the-home” and projection optics, all using the company’s proprietary deposition technology. They’ve now transferred some of this expertise into PV production. “We are excited about the opportunity this funding gives us to bring our proven high volume production technology to the solar industry,” Pearce said. “We believe we have the enabling technology to reduce the cost of photovoltaic modules from today’s approximately $3.00 per Watt to less than $1.00 per Watt, thus making solar generated electricity competitive with conventional energy sources.” The new funding is earmarked to transition the company’s demonstrated R&D process to an existing high volume production system rated for 5 MW of annual solar cell output. Last year Miasol&eacute demonstrated solar cells with 12 percent conversion efficiency, a level competitive with market dominant multi-crystalline silicon solar cells. “In addition to the long-term financial stability this funding brings, we are now able to accelerate our ramp to high volume production,” Pearce said. “As photovoltaics become increasingly a mainstream technology, the battle for who will lead the industry will be fought on the manufacturing floor, not in the lab. CIGS based thin-film solar cells have tremendous potential, but up to this point the industry has lacked high volume production technology.” VantagePoint was joined by Firelake Strategic Technology Fund, Garage Technology Ventures and Nippon Kouatsu Electric Company. Venture Banking Group also participated in the round. Concurrent with the funding, Miasolý announced the appointment of VantagePoint Managing Director, Bill Green, to the Board of Directors along with Bill Reichert, President and Managing Director of Garage Technology Ventures.