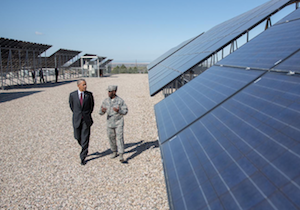 In a letter today to U.S. International Trade Commission (ITC) Chairman Rhonda Schmidtlein, a group of veterans and former defense energy professionals urged the ITC to consider carefully U.S. Department of Defense (DOD) energy security and resiliency efforts before making a decision this week in the Suniva/SolarWorld trade case.

The group said in the letter that they are “deeply concerned” about the petitioners’ trade remedy and the harm it could do to the national and energy security efforts of the DOD.

“The proposed tariffs and minimum prices would double the cost of imported solar cells and modules used in utility-scale defense energy projects,” they said. “This dramatic cost-increase could potentially jeopardize the financial viability of planned and future solar investments on or near domestic military bases.”

The petition seeks duties and inflated floor prices for cells and modules imported to the U.S. from anywhere in the world.

“Solar energy systems on or near military bases are used to mitigate utility, grid and other energy disruptions which may impact an installation’s mission assurance and war fighting operations,” they said.

Federal law calls for the DOD to produce or procure 25 percent of its facility energy from renewable resources by 2025.

Join Renewable Energy World on September 28 for a webcast with SEIA President and CEO Abigail Ross Hopper; NEXTracker CEO Dan Shugar; and Matthew Nicely, Partner, Hughes Hubbard & Reed, on what happens next following the Sept. 22 ITC ruling. Click here to register for the webcast: What Now? How You Should Be Positioning Your Business in Light of the ITC Ruling