These thin-film photovoltics can be deposited, not only on glass, plastic, or metal substrates, but also on flexible substrates. This offers the advantage of roll-to-roll processing, thus significantly reducing manufacturing costs. Furthermore, solar cells on flexible substrates allows for easy deployment of solar panels, where tolerance against rolling or bending is usually critical. This potentially leads to the use of PV panels in a much wider variety of applications. However, the marginal flexibility performance of silver metallization pastes in use today still severely restricts the practical use of flexible solar cells. In addition, the slump of the pastes after print reduces the effective exposure area to sunlight considerably.

Now, a flexible high-performance silver metallization paste has been developed for use in flexible thin-film photovoltaic solar cells. The binder of the paste is a soft epoxy-based resin system. Compared with a more conventional thermoplastic paste system, this exhibits superior adhesion and is flexible. The new material, designated LTTF-6363, also displays excellent print characteristics and non-slump performance – extremely important for maximizing the effective open areas on solar cells.

This new silver metallization paste can also be cured at temperatures below 200°C and exhibits very good solderability – allowing easy soldering connection with other electronic devices.

The Quest for Flexible Silver

As Table 1 (below), shows, several polymeric binder systems were investigated for their potential as a flexible silver paste. Paste A was a commercial silver (Ag) paste, and was used as a control. Other than the control, all pastes contained 92% Ag by mass for the binder evaluation. Once a binder was selected, the paste was further optimized in Ag content.

The potential as a flexible silver paste was assessed by measuring the contact resistance of cured paste on an indium tin oxide (ITO)-coated CIGS substrate after humidity and bending treatment. Besides flexibility, other properties are also required, such as good contact resistance stability against thermal cycling and UV exposure, and qualities such as bulk resistance, volume resistivity, solderability, printability, and slump-resistance.

The different metallization pastes were subjected to a number of performance tests. For the flexibility testing, for example, a sample of the ITO-coated CIGS substrate was bent against a 6 mm diameter pin. Each cycle was bent forward and backward alternately, with orientation of lines being vertical to the pin axis. The bending test was applied to samples after 85°C and 85% relative humidity treatment for zero, three, seven and 14 days, respectively and the contact resistance was measured before, and after, bending four, eight, 16, and 32 times. Besides contact resistance, the possible occurrence of breaking or peeling off was also examined.

Before the humidity treatment, the commercial paste (A) showed an increase in contact resistance with increasing bending numbers. This is attributable to the poor adhesion of the thermoplastic binder toward the substrate. This poor adhesion was further aggravated by the humidity pre-conditioning, and consequently resulted in peeling off upon bending. In the case of three days of pre-conditioning, the paste peeled off after bending just four times, indicating a total lack of compatibility with flexible solar cell applications.

On the other hand, the humidity pre-conditioning caused a decrease in contact resistance, presumably through the formation of hygroscopic leakage current paths.

For epoxy systems, no paste peeling off the substrate could be discerned, and the contact resistance generally decreases with increasing bending number.

Epoxy systems in general promise superior adhesion toward substrates, therefore minimizing the chance of delamination after repeated bending. Meanwhile, bending very likely promotes piercing of Ag flakes through the epoxy binder, thus allowing for a better contact with the electrically conductive substrate and consequently resulting in a reduced contact resistance. The decrease in contact resistance with increasing bending is more profound for a softer epoxy system, as shown in Figure 1 (below). Presumably, a softer epoxy can be pierced through more readily. 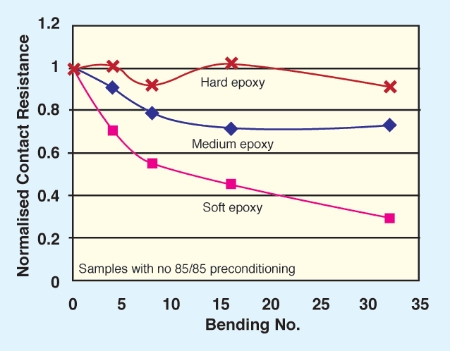 For pastes on copper, other than paste D all pastes exhibit a decreasing contact resistance with increasing humidity treatment, presumably through forming a hygroscopic leakage current path. Paste D employs hard epoxy resin, suggesting a high glass transition temperature, and hence a slow moisture diffusion rate through the binder. This will result in insensitivity toward humidity.

The paste E that contains epoxy/acrylate resins showed significant increase in contact resistance. This is attributable to the weak adhesion of this paste, which was further weakened during thermal cycling. Contact resistances of other pastes slightly increased with increasing cycle number.

The change in contact resistance under UV exposure was negligible for all six pastes tested, as was bulk resistance of the samples.

The effect of humidity, thermal cycling, and UV treatment on bulk resistance was also measured. Figure 2 (below), shows how the bulk resistance decreased during humidity treatment. Paste E containing epoxy/acrylate resins showed much lower bulk resistance than other pastes and stayed as the lowest. 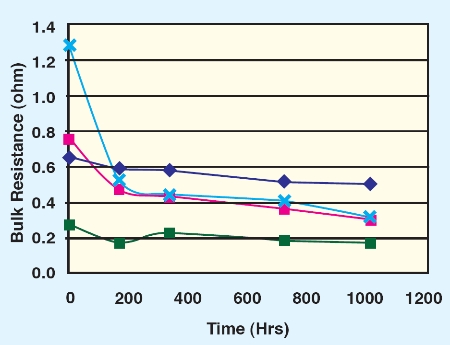 On the other hand, all pastes showed slightly lowered bulk resistance following thermal cycling, as shown in Figure 3 (below). For pastes C and F, both with soft epoxy resin, the bulk resistance decreases rapidly initially, then reduces gradually with increasing temperature cycling. 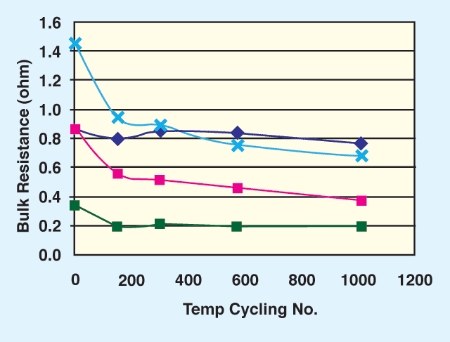 Finally, in some applications, the metallization lines need to be connected to electronic devices by soldering. In this case, solderability of the conductive line is important. All six pastes were evaluated for wetting property. Paste A didn’t show any wetting at all. Paste D, with hard epoxy resin, showed a moderate wetting. Pastes B, C, E, and F all showed good wetting characteristics.

The Binder of Choice and Optimization

Considering the various parameters resulted in a number of the pastes being eliminated from further investigation. For instance, based on the bending test data, paste C with soft epoxy is better than paste B (medium epoxy) and paste D (hard epoxy) in achieving low contact resistance under flexible applications. However, paste D is also considered not desirable based on its solderability characteristics and, based on the temperature cycling data, paste E is not suitable due to poor adhesion. Comparing pastes C and F, it can be seen that a smaller Ag flake (in paste F) contributes to a slightly lower contact resistance, but a quite higher bulk resistance. The latter can be attributed to a greater extent of discontinuity of small flakes.

The contact resistance is virtually constant regardless of the Ag content, and is slightly higher than for paste A. The bulk resistance shows a very moderate concave curve, with a minimum value at around 94%–95% Ag, lower than paste A. The volume resistivity decreases initially, reaching the minimal value of Ω24/cm at around 96% Ag, then increases again with increasing Ag content. The minimal value is higher than paste A. 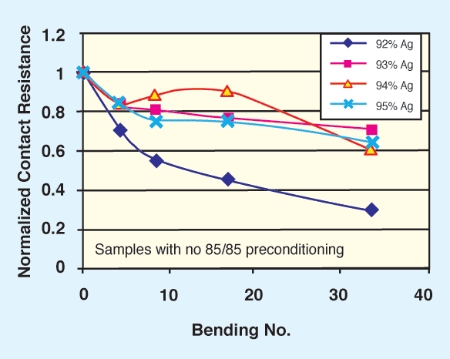 When the Ag content was decreased down to 94% or below, no electrical discontinuity or physical deterioration could be discerned. Accordingly, the optimal Ag content is determined as 94% w/w when considering electrical properties, stability against humidity, and flexibility.

The 94% silver-based metallization paste, an optimized version of paste E now designated LTTF-6363, has been specifically developed for thin-film photovoltaic flexible solar cells. The binder of the paste is soft epoxy-based resin system, which exhibits superior adhesion and flexibility when compared with thermoplastic paste systems.

Excellent print characteristics and non-slump performance are also extremely important for maximizing the effective open area on a solar cell and, in addition to its performance under humidity, temperature and bending treatment, the binder system was also formulated to resist cold slump after the print. It also gels quickly upon heating, preventing hot slump. Comparison of printed pastes shows, for example, that it holds the print shape very well, while that of the control, paste A, experienced significant slump. The gap in the slump behaviour between the two materials further enlarged after curing when the width of paste A was about 60% wider. It therefore blocks 60% more sunlight when compared with the new material.

Flexible thin-film photovoltaic technologies are on the cusp of a major market breakthrough and even offer the opportunity to open completely new market sectors. However, a number of technological barriers remain to be overcome before flexible thin-film lives up to its potential for grid-parity. Nonetheless, the development of flexible metallization pastes such as LTTF-6363 is a major step towards this goal.