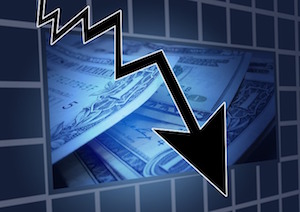 First Solar Inc. slumped the most in three months after reporting its biggest-ever loss and cutting its earnings forecast.

First Solar posted a record net loss of $719.9 million for the fourth quarter, according to a statement Tuesday. The Tempe, Arizona-based company said operating expenses will be higher this year than it had previously expected and earnings will be lower.

The loss is largely because of a restructuring plan announced in November. First Solar scrapped plans to introduce a new panel design this year, the Series 5, while firing 1,600 workers and retooling its factories to produce the Series 6 starting in mid-2018. The move came as a global oversupply helped drag panel prices down 35 percent last year industrywide, and the company’s sales plunged 49 percent in the quarter.

“When you see module price dropping as rapidly as we did going back to July you have to make adjustments,” CEO Mark Widmar said on a conference call Tuesday. “We have seen prices start to stabilize.” He was promoted in July from chief financial officer and immediately began reviewing First Solar’s strategy.

Without the Series 5 panel, the company is relying on its aging Series 4 design, which is less competitive compared to rivals’ products. Sales plunged in the fourth quarter to $480.4 million from $942.3 million a year earlier.

The shares were downgraded Wednesday to the equivalent of sell from hold from Credit Suisse Group AG.

Widmar is calling 2017 a transition year, and he increased his sales forecast for this year to $2.8 billion to $2.9 billion, up from earlier guidance of $2.5 billion to $2.6 billion. The company expects a loss for the year of 5 cents to 80 cents a share, compared with the prior forecast ranging from a loss of 10 cents a share to profit of 45 cents. Operating expenses will be as much as $380 million, up from the prior estimate of $290 million to $305 million.

Excluding $729 million in restructuring charges and other items in the fourth quarter, the company posted a profit of $1.24 a share, beating the 98-cent average of 18 analysts’ estimates compiled by Bloomberg.

Still, the net loss of $6.92 a share in the fourth quarter was significant, after reporting net income of $164.1 million, or $1.60 a share, a year earlier. The last time First Solar reported a loss of this magnitude was the first quarter of 2012, when solar suppliers were suffering through a global glut that dragged down prices and ate into margins. The company lost $5.20 a share then, in part because of another restructuring program.

“This perpetual oversupply will continue to exist,” Widmar said. “We just have to create a product that will compete in that environment.”