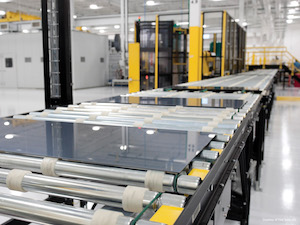 When solar analysts talk about the solar coaster, they aren’t kidding. News on November 16 that U.S. thin-film solar module manufacturer First Solar was planning to lay off a significant portion of its workforce, cancel its series 5 module production line and restructure the company hit the industry hard, especially since the news came just one week after the U.S. presidential election in which Trump was elected.

But it’s important to remember that while the news did coincide with the news that the Trump administration will be taking office in January 2017, the two announcements have nothing to do with one another.

Solar PV prices have been dropping like stones since the summer, when the Chinese government announced that was scaling back the building of PV power plants from an estimated 20 GW per year to 9 GW per year.  That announcement left solar PV manufacturers with massive module oversupply, sending PV prices plummeting. Paula Mints discussed this on the 3@3 on Solar PV video series on September 28.

Clearly, First Solar’s CdTe technology can’t keep up with the falling prices. The company had just announced its Series 5 module at Solar Power International in September, showing it in various booths around the show floor. That Series 5 module “was positioned to significantly reduce balance of system cost as compared to Series 4,” said CEO Mark Widmar in a guidance call on November 16. However, he said that the change to the Series 5 would have resulted in a slightly higher cost per watt than the Series 4, which “has proven to be prohibited in the current low ASP environment.”

According to Widmar, the new plan “enables the faster technology deployment at a lower CapEx and risk profile.”

“Simply stated, the best use of our factory space is to produce Series 6, our lowest cost and highest efficiency product,” he said.

The company expects the Series 6 module to have an efficiency above 18 percent and exceed 420 watts per panel, which it hopes will render the module price competitive with all forms of crystalline silicon technologies.