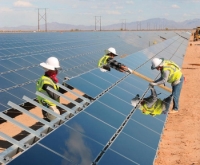 New Hampshire, USA — American-based thin-film giant First Solar saw its profits take a steep hit in the second quarter behind market uncertainty in Europe. But on Thursday, the company said it expects a strong second half of 2011 fueled by growing markets in the U.S., India, China and Japan.

The company saw its earnings drop to $61.1 million through June 30, 2011 from $159 million in the same quarter of last year. First Solar’s net sales were $533 million in the quarter, a decrease of $34.5 million from the first quarter of 2011, which the company attributed to lower average selling prices as policy uncertainties in Italy, Germany and France adversely impacted demand in the second quarter. Quarterly net sales decreased from $588 million in the second quarter of 2010. First Solar (FSLR) was trading as low as $103 a share by early morning on Friday, down from its 52-week high of $175.45 in February.

The company said Thursday that it is now looking to growing markets to help it meet projections for the remainder of the year.

“Our North American business has grown from 17 percent to 25 percent of megawatt shift and is expected to be our No. 1 market in 2012,” said First Solar CEO Rob Gillette during Thursday’s earnings call. “In India, supportive policies and new local partners are driving strong growth, and we expect India to account for more than 10 percent of our megawatts this year. Our North American pipeline and new markets like India are helping to offset European market uncertainties, and both are expected to be multi-gigawatt, sustainable markets. In the second quarter, North America and India combined represented almost 50 percent of our revenues.”

Gillette pointed to an analyst survey that projects the 2011 market to grow to 19.8 gigawatts, up 19 percent from 2010. The analysts also see a compound growth rate of 12 percent from 2010 to 2013 as others markets — mainly North America, India, China, Japan and the Middle East — take up some of the volume traditionally reserved for the European market.

Here is how the company views its role in global markets, according to Gillette.