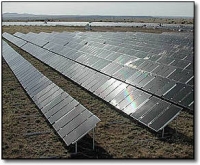 In an effort which steps up the size of an already massive solar photovoltaic (PV) power plant, First Solar, has supplied two new solar arrays totaling 240 kW for Tucson Electric Power (TEP) at the company’s Springerville Generating Station outside of Phoenix.

Phoenix, Arizona, August 29, 2003 [SolarAccess.com] Global Solar Energy, of Tucson, Arizona, provided project management, system design and oversaw the construction of the two 120 kW fixed-tilt, ground mounted arrays. This new installation increases the capacity of First Solar arrays installed at the Springerville facility to 480 kW. The first two arrays of First Solar modules were installed at TEP’s Springerville facility as a beta-site in late 2001 allowing the company to validate product performance prior to releasing the FS Series modules for full commercial production. “We chose to include First Solar modules in our expansion because we are interested in supporting the development of products that will lower the cost of solar generated electricity.” said Tom Hansen, VP & Technical Advisor of TEP. “The newest arrays are achieving the results we expected.” Based on the results of the beta-site testing conducted by TEP at Springerville, First Solar said they gained valuable field experience with first generation products which ultimately led to numerous improvements in the manufacturing and test processes. “TEP was one of our original beta site customers for the first FS Series products and we are pleased that the company decided to include our latest generation of commercial products in this important expansion of the plant.” said Mike Ross, Product Manager at First Solar. “We have an aggressive product roadmap and will continue improving our module efficiency to the benefit of customers like TEP.” While still undergoing expansion, TEP’s Springerville Generating Station Solar System, located in eastern Arizona, is the second largest installation of PV modules in the world, currently made up of three and half DC MW of crystalline silicon and thin film modules, said First Solar. The Springerville site has over one MW of thin-film modules making it one of the largest installations of thin film solar modules in the world. Approximately half of the thin film modules installed at Springerville have been manufactured by First Solar.