Cost is one of the biggest barriers to bringing solar to scale. Tremendous strides have been made to date — module prices have come down 50-70% in the past two years alone. Where are the next cost reductions going to come from?

A breakthrough new technology that delivers mindblowing lower costs could, in theory, be introduced any day. But waiting on breakthroughs is a dicey proposition — change is hard, and commercializing change is even harder. The good news is that even without a radical breakthrough, there are plenty of cost reduction opportunities in today’s technology.  Both balance of systems (BOS) and silicon raw material supply offer promising paths to lower costs.

RMI found opportunities for near-term reductions of more than 50% by simply scaling and implementing current best-practices. That alone would reduce total BOS costs to around $0.60 to $0.90/W for large rooftop or ground-mounted installations.

The whole study deserves a read, but here are two slides that capture the issue particularly well: 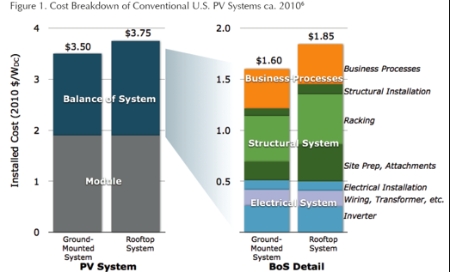 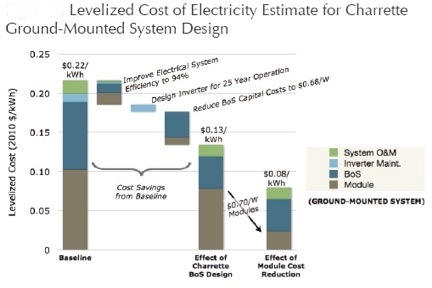 Many of these BOS soft-costs can be addressed via smart policies that encourage robust, competitive local markets or by directly inserting standardization and process efficiencies into the system. States are making continued progress on the former through RPS and other market-building policies, and the DOE’s Sunshot Initiative will be focusing a lot of its activities on addressing the latter opportunity.

While the RMI study looked at everything but the module, there are some promising areas for near-term module cost reductions as well. Let’s take a look at silicon. It’s the raw material in crystalline PV technology (the dominant technology which constitutes about 80% of the global solar market), and it makes up a non-trivial portion of a module’s cost.

Silicon is still much more expensive than it needs to be.  Here’s a slightly outdated chart from UBS. We realize that the numbers are not legible on the chart so here is a description: the left column shows price per kg of silicon and starts at $50 at the bottom, increasing to $450 at the top.  Across the bottom are the dates in one-year increments.  The first date is March 1998 and the last is March 2010.  The cash cost is the thick blue line that runs straight across the the bottom and the spot price is represented by the thin blue line that spikes starting in March 2005.  The third blue line that runs across the bottom in line with the spot price until March 2005 represents the contract price for silicon.

Today’s numbers may be a bit different, but not, unfortunately, by very much. 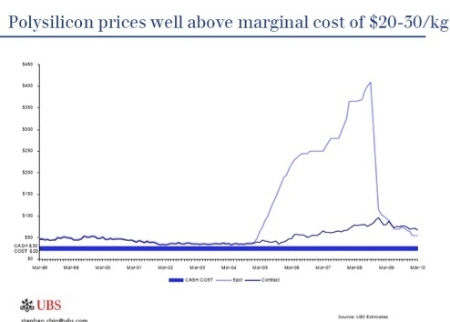 As you can see, since the end of 2004, when the German feed-in tariff (and thusly the global solar industry) got serious, the price of silicon has born little relationship to the cost of manufacturing.  And as of last spring, average silicon costs were still trading at substantial premiums to the cost of production — with margins over 50%, inordinately high for a commodity product.  There is clear room for reduction, which would give consumers a cheaper product and expand price-sensitive markets.  But when and how will that occur?

According to Digitimes, spot prices for silicon in 2010 soared from $50-55/kg at the beginning of the year to $70 as demand continued to outpace supply. Looking forward there are several factors that could mean lower silicon prices.  First, multiple markets all over the world have taken a recent beating. France has announced a three-month market moratorium as it considers tariff reductions and a 500 MW annual cap.

The Czech Republic is levying a 26% retroactive tax on current projects while it weighs future reductions.  Spain has capped its program to an ostensible 500 MW, and is still making adjustments that participants have termed ‘painful’.  Italy looks to be imminently reaching its total goal for 2020, with an open question as to what happens going forward.

The UK has an uncapped program but a capped budget, leading it to announce the beginning of a ‘revisitation’ of its programs.  The New Jersey governor is telegraphing a policy reprioritization of natural gas over solar.  And German policymakers and industry stakeholders are both actively managing the program with the stated goal of dramatically decreasing growth.  If these market reductions cumulatively add up to something less than market growth elsewhere, a silicon oversupply condition could result in near-term price reductions.

Looking at a more sustainable and perhaps less painful progression toward silicon cost reduction, much of the anticipated 2011-2012 U.S. market growth will be in the utility-scale solar sector.  Significantly, almost all of these projects will be secured via competitive processes—and material suppliers will be subject to intense competitive pressures.  This should send a market signal to ensure that all steps in the value chain work together to deliver the lowest costs—or miss out.

There are several lessons for effective policymaking.  First, according to RMI, by simply cutting the inefficiencies out of the existing system and improving racking and component design, it is possible for PV to deliver a 20-year LCOE of around $.13/kWh, unsubsidized.  That would put solar costs at or below current retail electricity pricing in many states today — and even more cost-effective as those retail rates continue to trend upward.

Secondly, this desirable result is not inevitable. Policymakers are responsible for establishing programs that build large, friction-free markets that in turn bring down the costs necessary for scale—a virtuous cycle of cost reduction and market expansion. Whether this future will come to pass is entirely within their hands.

If you want to delve deeper on these issues, join Vote Solar’s upcoming free webinar with RMI on BOS cost reductions.