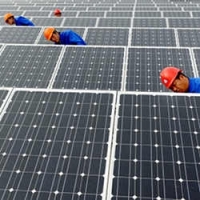 Shanghai, China [RenewableEnergyWorld.com] Sales of Chinese solar modules, which accounted for nearly one third of the global market share, were shadowed in the wake of the financial crisis. However, what did not kill the Chinese companies made them stronger, especially in terms of product cost and market access.

Most of the top solar modules manufacturers in China had recovered as of the second half of 2009,  according to Sean Tzou, the chief operating officer of Trina Solar Limited, a NYSE-listed Chinese solar photovoltaic company.

Along with sales recovery, the Chinese may have grabbed more market share from their international competitors. “Trina’s global market share is estimated to have reached 6 to 7 percent in 2009, up from 3.5 percent in 2008, ” said Tzou. “We also estimate that Chinese solar module manufacturers, including Taiwan, answered over half of the world’s demand in 2009.”

Better cost advantages played a key role. Up until mid-2008 Chinese manufacturers had to buy extremely high priced polysilicon, a major part of solar modules production cost, while their international competitors had access to long-term supply agreements at significantly lower prices. However, following the financial crisis, the global polysilicon price slumped by 87.5 percent, giving the Chinese a way in.

In addition, the Chinese processing cost is 30 percent lower than that of their European counterparts, which is a “remarkable cost advantage,” said Shawn Kravetz, founder of Esplanade Capital LLC, an investment firm in Boston that focuses on solar companies.

Due to this product cost gap, Chinese manufacturers are able to attract large-scale solar project developers, while their European and U.S. counterparts suffer losses in the price competition, according to Trina’s Tzou.

This advantage is expected to continue, despite the fact that increasing western manufacturers, such as SunPower Corp. and SolarWorld AG are opening new factories in Malaysia, South Korea and other Asian countries, in the pursuit of lower processing cost.

Another major advantage for Chinese solar companies is their ready access to finance amid the global economic downturn. Backed by China’s preferential policies towards renewable energy, domestic solar modules makers have benefited from supportive local banks.

“This is something that European companies do not enjoy,” said Frank Haugwitz, former European Union Renewable Energy manager within the EU-China Energy & Environment Program. “Chinese companies have easier access to local finance institutions who could help them in their endeavor in developing new markets.”

Such new markets include North America. In its latest second quarter statement, Suntech reported that “major investment in the U.S. market has resulted in rapidly growing dealer network.” The company now has more than 200 authorized dealers throughout the United States, Canada and Mexico.

Like Suntech, other Chinese solar manufacturers are gearing up further expansion. As China’s solar demand was awakened by government incentives last spring, Yingli Green Energy, a top Chinese solar manufacturer, opened a factory in South China’s Hainan province in July, aimed at the domestic and Southeast Asia markets.  And this year, Canadian Solar, another solar leader in China, will develop solar projects in South Korea together with LG Group.

Furthermore, China’s state-owned investment companies that are involved in overseas solar projects may drive up the country’s solar modules sales around the world. For instance, China Energy Conservation Investment Corp., which previously partnered with several local solar module makers in China, is talking to European developers about financing solar projects in Germany, Spain and Italy, according to a December report from Wall Street Journal.

While for now things look good, Chinese solar manufacturers may face challenges in the future, due to rising trade frictions with Europe and the U.S., where about 90 percent of their solar modules go to. In addition, the Chinese have to fight the concerns about quality that come from the “made-in-China” image, even though they have achieved equal or better quality ranks as Western manufacturers, said Esplanade Capital’s Kravetz.

It seems Chinese solar manufacturers are winning the battle, but have not yet won the war.

“Well now, we [the Chinese] have good timing, advantage of financing, we get the market share, and then that will be our market share forever?” asked Haugwitz. “No, no, no. That would be a little bit too easy. The competition will go on…I look at a company, how good its quality, reputation and price.”

Coco Liu is a professional writer, based in Shanghai, covering renewable energy and business news. Contact Coco at cliu.info@gmail.com.