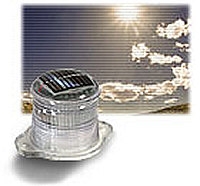 Starting December 1, FAA visual guidance specialists will install 90 taxiway edge lights at Cross Keys (edge lights along the main runway will not be included). The blue light-emitting diode lights will remain on from dusk to dawn. Over the next nine months, experts will check the test lights for visibility, durability and effectiveness. This innovative program could eventually benefit thousands of small general aviation (GA) airports across the country. These are the same taxiway lights that guide pilots of U.S. fighter jets and cargo planes deployed in the Middle East. The Canada-based Carmanah company in particular has deployed thousand of these portable, solar-powered lighting systems all around the world, and has found a particular niche with the U.S. military. Since the lights are small, portable and self-powered, they can be set up or taken down in a very short time offering the military a crucial element of flexibility. Perhaps just as important, the lights also negate the need for costly electric power lines along a chosen location. Many smaller general aviation airports have minimal, if any, lighted guidance for pilots taxiing from runways to parking areas. The solar-powered lights will add safety to remote sites that lack access to electricity, as well as those airports with limited resources to pay for power. The FAA Aerospace Forecast reports that general aviation used 19,000 different private or public airports last year. Cross Keys Airport, 14 miles southeast of Philadelphia, is representative of a typical GA airport that lacks taxiway edge lights. The solar-powered lighting system is one of many ways the FAA Airport Safety Technology Section is working to enhance safety at airports.