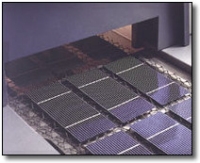 As executives at Evergreen Solar look back on 2002, they see a year spent working on advancing the company’s string ribbon wafer technology while continuing to reduce costs and increase revenues.

Marlboro, Massachusetts – March 6, 2003 [SolarAccess.com] The Massachusetts-based developer, marketer and manufacturer of photovoltaic (PV) products announced results for the fourth quarter and year ended December 31, 2002 during a conference call Wednesday. While the detailed financial information reveals a company that is still losing money, progress continues to be made as Evergreen continues to develop its string ribbon process while working to more than double its output. “I am very pleased with the progress we made in 2002 on our key business metrics of increasing sales and reducing costs,” said Mark A. Farber, president and CEO of Evergreen Solar in a statement. “While the overall economy was sluggish, Evergreen was able to increase revenues. Additionally, we reduced our manufacturing costs and improved our product gross margins. While there is still plenty of room for future improvement, we firmly established string ribbon technology in commercial scale manufacturing during 2002.” During a conference call to further discuss the company’s financial results, Farber highlighted the more than 1000 homes and businesses that received Evergreen Solar modules in 2002 – including the White House in Washington, D.C. Installations of Evergreen-based systems are grid-connected projects 90 percent of the time and exports were concentrated in Europe, especially Germany, in 2002. This represents a change from previous year, Farber said, when a large percentage of the company’s exports went to Japan, through a partnership with Kawasaki. “Japan was somewhat of a disappointment for us in 2002,” Farber said. “We are not counting on Japan very much for 2003 sales.” Farber said the company will focus on two points in 2003: improvements in its string ribbon process and completing the addition of a second full production line to their Marlboro facility. “I am now pleased to say that we are targeting a capacity of between 10 and 14 MW in Marlboro,” Farber said. (It was earlier announced that the full production at that plant would be about 7 MW.) Farber said improvements are expected growing double strings of wafers in each furnace during the next year, which will leverage capital, labor costs while keeping the cell size consistent, therefore not effecting module construction. The increased efficiency is predicted to reduce costs of the module by almost 25 percent, according to the company. “We’re very proud of our accomplishments in 2002,” Farber said. “We’re setting the stage for tripling our production and remain cautiously optimistic.”