New Hampshire, U.S.A. — Two reports out in the past week examine Europe’s solar PV market in 2011, indicating slowing growth in the flagship countries and promise in some smaller regions for 2012 and beyond. Note that the data that follows is preliminary; final 2011 numbers won’t be known until later in the first quarter, including some likely revisions thanks to a stronger-than-expected fourth quarter in several key regions (more on that below).

New grid-connected PV capacity worldwide in 2011 rose by 67 percent to nearly 28 gigawatts (GW), nearly 21GW of that in Europe (up 57 percent from 2010’s 13.3GW), and 60 percent in Italy and Germany alone says the European Photovoltaic Industry Association (EPIA). Meanwhile, NPD Solarbuzz calculates Europe’s solar photovoltaic (PV) market growth at 18 percent overall in 2011, with a 23 percent surge in 4Q11 that will quickly result in changes in incentive policies, particularly in Germany and Spain. (Update 2/1/2012: Asked about the difference in end demand and growth numbers, the EPIA and Solarbuzz confirmed that they’re talking about different things — Solarbuzz looks at “modules delivered to installation sites,” EPIA looks at “grid-connected systems.” Note that the timing between module/installation completion and grid connection can be months or even quarters.)

Total installed PV capacity worldwide topped 67GW (vs. 39.7GW in 2010), with energy output of around 80 billion kWh enough to supply 20 million households, says the EPIA. In Europe, over 50GW of PV systems were installed at the end of 2011, producing some 60 billion kWh on an annual basis. The EPIA seems confident that Europe increased its cumulative capacity base by over 50 percent.

Here’s the EPIA’s summary of new grid-connected PV in 2011, by region:

Missing from that list is the Czech Republic, which ramped to 2GW of installations over the past two years but put in less than 10MW in 2011 due to “strong opposition from major stakeholders,” says the EPIA. Other regions with small but growing PV capacities include Austria (100MW) and Bulgaria (80MW). 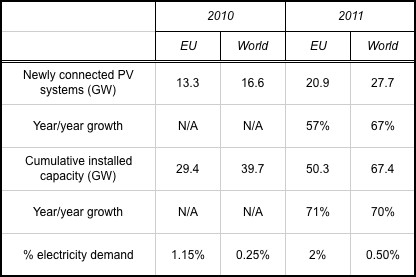 Looking specifically at 4Q11 results, German solar PV installations surged 63 percent in just the final three months of the year, while the UK and Belgium added 370MW, according to NPD Solarbuzz. Thank oft-cited mild weather and impending FiT reductions. German officials, for example, are debating a cap vs. monthly FiT stepdowns instead of biennial adjustments. Italy and France’s PV markets actually declined in 4Q11 due to installation deadlines and tariff reductions.

The late-year boom is causing nations to rethink their solar-friendly incentive policies in 2012, notes Solarbuzz. 1Q12 demand will increase 10 percent, with notable growth in Belgium, France, Spain, and Greece, and a potential “short-term boom” in the UK depending on how that country resolves its dispute over cancellation of solar incentives. 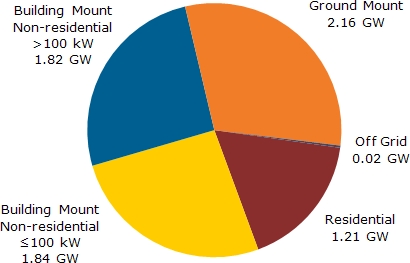 Solarbuzz anticipates Germany and Italy’s combined market size will shrink by more than a third (-37 percent) in 2012, while countries with the strongest growth are expected to be Austria, Bulgaria, the Czech Republic, and Romania. New markets are emerging in the East and Southeast Europe; two 100MW PV plants were built in the Ukraine in 2011, and look for two 150MW plants in Serbia in 2012, plus a 1GW project slated for 2013-2015.

Growth for all countries will be triggered by two factors: reduced incentive tariffs means less public funding needed to build out individual markets, and as solar PV approaches “grid parity” with retail electricity prices in some markets, investors will become less dependent on public funding. In France, for example, a 60MW project is in the works from a major developer based on a 30-year PPA with a local utility; similar prospects are being discussed in Greece at the government level, says Solarbuzz. In Spain, though, prospects are dimmer for comparable projects due to the nation’s “very large electricity generating capacity overhang” and resulting moratorium on any new renewable electricity plants.