London, UK Europe’s solar market is in good shape despite the global financial crisis, a new study by Lux Research shows. Small European markets will show favourable returns in the near term, the study predicts, while Asian markets will rise over the next few years. Portugal’s market is currently the hottest – for solar investors able to undertake projects under the nation’s installations cap. The Portuguese internal rate of return (IRR) remained high in 2011 and is projected to push the annual market to nearly 400 MW in 2016. At number two is the solar market in Cyprus, followed by Hawaii, Greece and Israel.

‘Uncertainty surrounding Europe’s financial situation and its countries’ ability to pay out incentives will prevent wild growth – keeping that market relatively constant,’ explains Matt Feinstein, the Lux Research analyst who led the study. ‘However, a number of Asian markets have high returns going into 2012 – notably Malaysia at 24.1%, the Philippines at 22.6%, and Japan at 20.9%. They will push demand toward that region in 2012 and 2013.’ 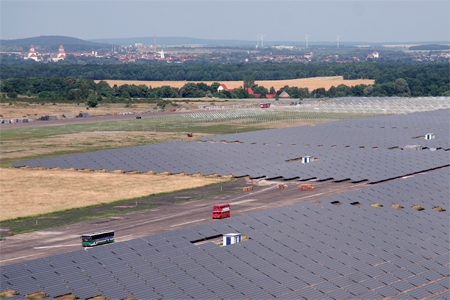 Europe is doing well in the near term but in the coming years will decline in favour of Asia. (Source: JUWI)

REW asked Feinstein to comment further on the processes involved in the study and its results.

REW: You analysed 50 US states, 31 Chinese provinces and semi-autonomous regions, and 75 countries/regions. How (broadly) does each category break down? That is, which states, provinces, countries etc are most significant and why?

Feinstein: For the US states, California and northeast states with SREC markets have shown the best returns. Even though systems normally only generate SRECs for three years or so, prices are so high that the investment is well worth it. Among countries elsewhere, small European subsidies show favourable returns there, but of course the financial crisis has led to decreasing confidence about the growth potential in that market – not to mention that it is already well-saturated with solar, and suppliers are looking elsewhere to enable broader distribution, immunising their forecasts from the risk associated with uncertain subsidies.

REW: You broke down IRR for residential, commercial and utility installations. How do these areas compare broadly in terms of growth, and how do they compare between key regions?

Feinstein: It largely depends on the subsidy scheme, when looking at specific regions. In India, some states prefer utility-scale installations, whereas others give generous rebates on residential systems. In total, the commercial segment is the largest, but growing slowest. Residential is smallest and growing the fastest – leading to a relatively equal split in five years.

REW: Tell us more about the top five locations (Portugal, Cyprus, Hawaii, Greece and Israel) as they figure in your analysis.

Feinstein: Truth is, the numbers work out nicely there – IRR enables an apples-to-apples comparison despite the size of a market – but these are all relatively small markets that won’t figure largely into the broad demand picture.

REW: Describe the method behind the SDF.

Feinstein: We compile data from the solar end – module and balance of systems pricing, module efficiencies, financing, O&amp;M costs, etc – and electricity prices and demand, and solar insolation, by region. We can then calculate the levelised cost of energy (LCOE) of a system by geography, technology, and application. As we understand up-front investment, cost-per-kWh generated, and the value of returns over time (subsidies, energy), we can determine IRR. Based on historical installations and total addressable market, we correlate that to projected MW installed.

REW: Finally, can you offer our readers some more detailed predictions?

Feinstein: Asia – South Asia, specifically – becomes a heavy riser medium- and long-term as Europe declines. North America – specifically the US – takes that demand in the short-term, as long as the investment tax credit (ITC) is still around.