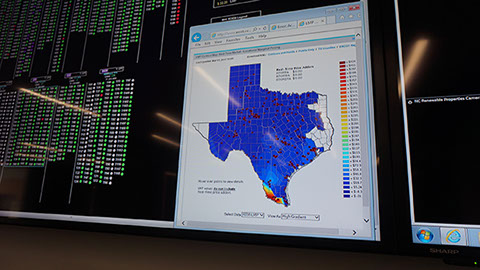 Energy Cast is a podcast featuring some of the top experts across all links in the energy industry chain, including renewables, generation and more! Jay Dauenhauer created the show and has been hosting Energy Cast for several years.

This week, we revisited the first episode that Energy Cast released.

On my first episode of Energy Cast, I visited the Renewable Control Center, a state-of-the-art monitoring facility run by Duke Energy. The center is located in the heart of downtown Charlotte, at the NASCAR corporate building.

The Center currently manages about 4,700 MW of renewable generation, in the form of wind (including offshore), solar, and battery.  About 2/3 of the capacity is owned by Duke, and the remaining assets are owned by 3rd-party operators who pay Duke to monitor them.

For this episode, I interviewed Brandon Edmonson, Manager of the Renewable Control Center – Commercial Portfolio.  While there, I learned the safety capabilities the center was able to provide staff out on site.  We also discussed how the center was keeping more renewable energy on the grid by reducing the number of curtailments.

I was first drawn to this story because a center like this is using data, especially meteorology, to help predict renewable energy supply.  For years, utility staff meteorologists have been predicting demand, but this is a game-changer. (This podcast originally aired in March 2017)

Learn more about the podcast here.