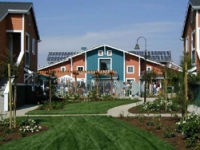 The Murphy Ranch Townhomes affordable housing development officially opened in a ceremony attended by dozens of interested local residents, politicians, contractors, and press. The project includes numerous green and sustainable building features, including solar power for all common areas in the development. Total installed solar capacity is about 30 kW AC, spread amongst numerous arrays located in the 7.2-acre project site. EcoEnergies was selected as the solar contractor to design, supply, and install all the systems.

Morgan Hill, California – October 8, 2003 [SolarAccess.com] The largest system on the site (12 kW AC) consists of 170 solar modules manufactured by BP Solar, each producing 85 watts, and five 2.5-kW inverters. It provides the electricity requirements for the community recreation building. This building is the centerpiece of the development, and will house an after school program, a computer lab, and weekly ESL (English as a second language) classes for adults. There are 8 additional solar arrays on the site, totaling over 18 kW in solar power capacity. These arrays are located on numerous carport structures on the site. Solar is not new to First Community Housing (FCH). This is the second project where FCH has gone solar to cover electricity needs. “Solar technology is a perfect match for affordable housing projects, because it provides a permanent reduction in operating costs,” said Peter Carrie, President of EcoEnergies. First Community Housing expects the financial payback from the three systems to occur in seven to eight years, with a return on investment of 12 to 13 percent pre-tax. Funds from the Emerging Renewables Buydown Program, administered by the California Energy Commission, assisted in bringing down the cost of the PV systems for the project developer. Additional buydown funds are provided through another incentive program specifically for low and affordable income housing projects.