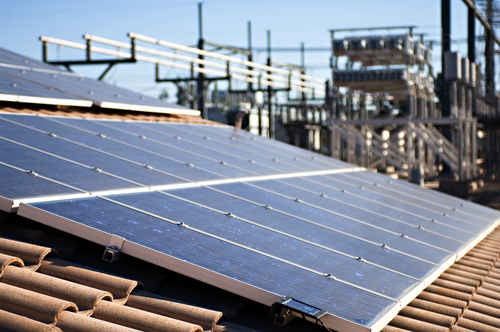 Rooftop panels are gaining popularity as the industry faces “anemic” growth in power demand that may redefine the traditional utility business model, as this growth makes it difficult to predict long-term energy demand, Rogers said at an analyst meeting in New York today.

“It is obviously a potential threat to us over the long term and an opportunity in the short term,” Rogers said in an interview after the meeting.

“If the cost of solar panels keeps coming down, installation costs come down and if they combine solar with battery technology and a power management system, then we have someone just using us for backup,” he said.

Duke, based in Charlotte, North Carolina, has built 1,600 megawatts of wind generation and 100 megawatts of solar since entering the renewable-electricity business in 2007 with the purchase of the wind developer Tierra Energy. It bought a second wind–farm developer, Catamount Energy Corp., for $240 million in 2008.

Rooftop photovoltaic panels are more common in California, the biggest U.S. solar market, than in North Carolina, where Duke has the most customers, Chief Financial Officer Lynn Good said in the interview.

“We’re certainly looking at the economics of residential and rooftop solar,” Good said. “The financing of these investments also needs to be explored.”

Duke has capital available to fund an expansion into rooftop solar if the company decides to pursue the market, Good said. “Our thinking hasn’t matured to the point that we’re actively pursuing anything.”