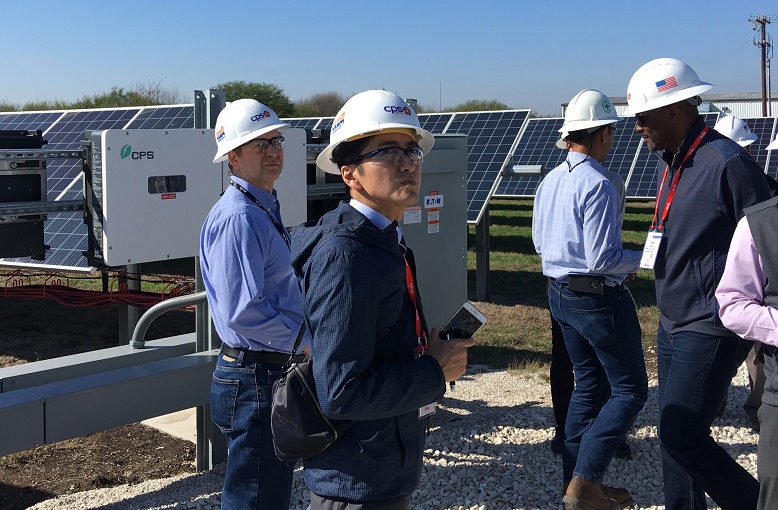 In a way, CPS Energy is embracing the future while also admitting uncertainty over what it might hold.

Solar and energy storage are certainly all the rage in power generation and yet they both contain major challenges. So San Antonio-based CPS Energy decided that owning its own renewable assets would be a great lesson to learn­-whether good, bad or both.

“We don’t know what the next solution will be,” said James Boston, project director for CPS’ new 5-MW solar, 10MWh energy storage combination in San Antonio, which just became operational this past year. “We have to look at all the avenues.”

CPS opened up its combo facility to a tech tour of DISTRIBUTECH International attendees Monday in San Antonio. DISTRIBUTECH officially begins Tuesday and runs through Thursday at the Henry B. Gonzalez Convention Center near the River Walk.

The solar-storage site is located well away from downtown at a secluded site near a substation, and just as importantly, a testing facility for the Southwest Research Institute. CPS and SWRI are working together to learn the limits of battery technology.

“We are a utility, we’re not a researcher,” Boston pointed out in explaining the collaborative effort.

The CPS solar and storage site is settled across more than 50 acres. RES Americas built the facility, which uses solar panels to generate power into the grid and utility-scale battery storage to charge from the grid and later discharge into the system. The four battery units are concrete containers with steel doors, each containing 31 racks of battery with 13 modules per rack.

Each module represents about 7 kW, the equivalent of an average San Antonio home, Boston noted. Samsung manufactured the battery units.

“Although renewables solve one problem, when it comes to carbon, it also creates another challenge,” he said.

Indeed, California knows this all too well with the impact of the duck curve. The sun generates its greatest photovoltaic potential in the late morning and early afternoon, when customer demand is the lowest. And it fades by the time people are home and using devices and appliances at their highest levels.

A solar plus storage works to smooth out that imbalance. For CPS Energy, making the financial case for the $16 million project also necessitates exploring other potential revenue resources. Thus, the testing of the project seeks opportunities in solar shifting, price shifting and fast frequency response.

“When we’re talking about energy storage, we’re always talking about layering opportunities,” Boston said. “We are building our strategy out” on how to use these resources.

Sometimes, you could say that SWRI researchers get paid to try and blow stuff up. And they learn much from what they test, such as the fact that EV batteries are much safer that most of us realize.

“We have 10 gas engine fires a day and no one cares,” said Mickey Argo, with EV testing at SWRI. “But we have one EV fire and it’s everywhere. They are very safe.”

DISTRIBUTECH International will have sessions on energy storage and solar integration throughout the week. For more information or to register, go to distributech.com.