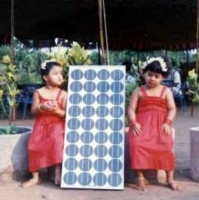 Over the years we have seen the costs of solar panels steadily come down, though not to the levels that many experts had predicted. The critical question always has been, at what point ($/watt) would solar PV make commercial sense for the rural areas of the developing world? I personally have never been clear what baselines people were using to compare against to reach their conclusions. I am not sure how convenience, reliability, better educational facilities, etc., have been transformed into financial figures on a spreadsheet. However, I sincerely believe from experience that solar PV is already very viable — provided accessible and affordable financing is created at the doorsteps of the rural people — thus I hardly paid attention to the future predictions of $/watt. Peak in Demand We all know now that, in the last 24 to 30 months, the cost of solar panels ($/watt) is increasing drastically (rather than decreasing as predicted by experts) and fingers are pointing toward Germany. The sudden boom in the German market and competition from the semiconductor industry has led to an imbalance in the supply and demand of feedstock. This has been one of the causes for the steady rise in solar module prices. Adding to the rise in prices has been the lack of availability of smaller modules, those that are required to power the meager load requirements of households in the rural areas of India, Sri Lanka, Honduras, Uganda or Fiji. Steady cash flow and decent profitability has forced the manufactures to weave away from manufacturing smaller modules, in order to cater to demand from Germany and other western countries. Rise in Disparity Documentation for the actual rise in the prices of smaller modules over the last five years, both in 37 watt and in 75 watt supplies, is shown below.

As seen in the diagram above, prices for 37 watts and 75 watts remained steady till 2004 and then started to rise. There has been an increase of 20% and 25% for 37 watt and 75 watt, respectively, as compared to 2003 prices. And a 25% increase in price really hurts the pockets of a rural household in the developing world. We can keep debating, who needs electricity more — a German household (who has a choice between grid and solar) or a rural household in Uganda (who has a choice between kerosene and solar), but the bottom line is that the solar industry does not have an immediate solution. There is also another problem: squeeze in the supply of smaller modules has increased the working capital requirements of smaller integrators in the developing world. While in 2004, smaller integrators were getting a credit period of 90 days, now they have to be satisfied with 30-day periods. This means that the working capital requirements have tripled. Unlike Germany, where payment terms from end-users are pretty well defined, here in the underdeveloped world that is not the case — leading to further uncertainty for the system integrators. Call for Balance Although the market in many of the countries like India (at least in some parts) and Sri Lanka were becoming mature — financing had fallen in place, system integrators had established good service networks and solar PV had attained decent awareness levels — suddenly the steady rise in prices has thrown the market out of gear. To get back the levels of market maturity requires immense hard work by the rural service companies and that is not cheap. It has taken years to convince people, bankers, etc., that solar PV — if financed and serviced properly — is comparable to other substitutes, but now the explanation needs to change. I am not sure what the explanation is. I do know the solution needs to be addressed by the whole solar industry — because the divide between the served and the underserved cannot keep increasing. About the author… H Harish Hande, PhD, is managing director of SELCO Solar Light (P) Ltd., in Bangalore, India. His company has overseen the implementation of thousands of installations, whose success are due largely to local involvement. SELCO also oversaw the Tsunami Solar Light Fund, which raised the funds to bring solar installations to assist some of the people who were displaced by the tsunami.