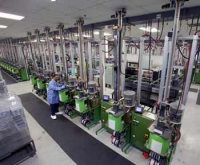 Cambridge, Massachusetts [RenewableEnergyAccess.com] Preliminary estimates for 2005 show global photovoltaic (PV) cell production increased more than 40% from nearly 1200 MW in 2004 to 1727 MW in 2005. European production growth outpaced Japan, U.S. production was relatively lackluster, but the real highlight was in the aggregate of small, global producers outside of the major markets that more than doubled cell production.

These are some of the key findings from the latest monthly edition of “PV News,” which has now formally shifted hands from its founder and longtime editor/publisher Paul Maycock to the Massachusetts-based Prometheus Institute, a nonprofit organization dedicated to the advancement of solar energy and other socially beneficial sustainable technologies. Maycock explained in a contribution to the publication that the market’s continued record growth came despite many projects being delayed or terminated due to a shortage of cells and modules. The major factors in the delay were the frantic race to expand capacity, a shortage of silicon, and increased prices, which led to long delays in the delivery of modules (as much as six months for veteran installers and virtually no modules for newcomers to the market). Maycock will continue to act in an advisory role and contributing writer but the monthly PV industry publication will now be guided by its new Editor-in-Chief, Travis Bradford, of the Prometheus Institute. The current issue’s top PV news item is the 2005 PV cell production data which breaks down PV manufacturing by company, by MW, by year. The following summaries, courtesy of PV News, highlight some key trends in the solar PV industry. For more detailed analysis and more information on PV News or the Prometheus Institute, see the link following the summaries. World PV Production Global production of PV cells continued its historic growth even in the face of a tight supply chain, particularly in silicon. As in prior years, Japan led the way in total cells produced with 833 MW, a growth of 38%. European cell production grew slightly faster at 44%, resulting in 452 MW of cells produced. The U.S. market grew, but only at 10% over the prior year as both GE and Shell lost ground. The real surprise is the more than doubling of cell production in the rest of the world to 289 MW, a dynamic likely to continue to shape the market in 2006. Top 14 Cell Producers of 2005 Of the top 14 cell companies in the world, the largest increase in production was achieved by Suntech with almost three times the volume produced in 2005 versus 2004. The top European producer, Q-Cells, has more than doubled production. Due to slower growth, BP Solar dropped from number 3 to number 7. The top Japanese companies have increased production significantly over the year, with Sharp producing 32% more cells and Kyocera 35%. Sanyo jumped from 7th to 4th place with 105 MW of its efficient amorphous silicon. U.S. Producers With an overall 10% increase in production, the U.S.’s increases and decreases in production are at the company level. Notably, Shell Solar decreased production from 62 MW to 42 MW. The reduction was primarily from the Camarillo, California facility, which is a fully integrated single crystal operation. A logical evaluation of recent events, i.e., Shell selling this plant to SolarWorld and a new partnership with St. Gobain, suggests that silicon supply constraint has seriously impacted Shell Solar. GE continues to straighten out its AstroPower acquisition, while BP, USSC (United Solar), and First Solar all sharply grew U.S. cell production. Japanese Producers Japan experienced a decrease in installations over the year, but an increase in production of 38%. Sharp is still the number one producer of PV cells, which it has been for the last six years. Of the top four companies, one (Sanyo) almost doubled production while the other three increased by around one-third. The Japanese cell production market looks increasingly concentrated in the hands of these top four producers, making up more than 95% of domestic production. The three smaller producers — Kaneka, Matsushita and Mitsubishi Heavy Industries — showed very little additional production in 2005 versus 2004. European Producers Q-Cells is by far the biggest gainer in the European category, more than doubling 2004 production. Two other large gainers are Schott Solar (formerly RWE Schott Solar) and Sunway, both from Germany. Overall production in Europe increased by 44%, approximately the same rate as the worldwide production. The market continues to be dominated by a larger number of smaller players. German companies grew their producer share to 78% in Europe. Rest-of-World’s Producers As a group, cell producers in the rest of the world doubled production from 2004 to 2005. The markets in these countries have not been very influential in growing domestic installations since the companies are mainly exporting at this point. Significant growth occurred with many producers, but Suntech represented 35% of total growth. Also, SunPower’s plant launch in 2004 led to its addition to the analysis.