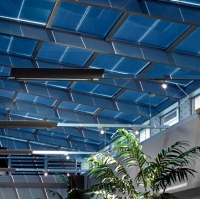 SAN FRANCISCO — Construction material maker Saint-Gobain exemplifies the kind of buyers who are scooping up greentech companies today. It’s a long-time company (founded in 1665!) that is making big bets in renewable energy, and announced on Friday the purchase of a business unit of a Belgian company that makes Solar Gard window films.

With the acquisition of Bekaert’s specialty film division, Saint-Gobain padded its growing portfolio of solar and energy efficiency offerings. The company, which generated €40.1 billion (US$53.9 billion) in 2010 sales, is likely looking for other acquisition targets now. It’s a good time to buy, considering that the economy remains weak and many companies are struggling.

“It’s a great time to be an acquirer,” said David Dolezal, managing director investment banking at UBS, during the Renewable Energy Finance Forum in San Francisco this week. “A lot of big industrial players are focused on how cheap these assets have become.”

Indeed, the bankruptcies of several solar companies promise to offer assets at a big discount. Canadian Solar just won a bid at an auction to buy all of silicon-solar-cell-maker SpectraWatt’s equipment for $4.95 million. SpectraWatt filed for Chapter 11 last month after news of its struggles began to leak late last year. The company had raised at least $91.4 million from investors such as Intel, Goldman Sachs’ Cogentrix Energy, PCG Clean Energy and Technology Fund, and Solon.

An auction for Solyndra’s assets is scheduled for Oct. 27. Solyndra filed for bankruptcy earlier this month after it couldn’t produce its solar panels at competitive costs. The company secured a $535 million federal loan guarantee to build a factory, which it completed last year, and its use of the loan guarantee has prompted some lawmakers, particularly Republicans, to question the merit of the loan guarantee program.

Saint-Gobain didn’t disclose the price it paid for Solar Gard, the brand for clear films that are added to the interior-facing surface of the window glass to reduce the sun’s heat. The acquisition complements some of its other purchase. Last year, Saint-Gobain invested $80 million in Minnesota-based Sage Electrochromics, a developer of electrochromic window glass. Electrochromic glass changes its color from clear to tinted (often in blue) to reflect or absorb light to cool or warm a room when a low-voltage current is applied.

Saint-Gobain is currently building a glass mirror factory in Arizona that will supply the concentrating solar thermal market. Solar thermal technology uses mirrors to concentrate and direct the sunlight to produce steam, which then goes to a turbine generator to produce electricity.

Mega merger-and-acquisition deals are few these days. Of the 133 M&A deals in 2011 tracked by Greentech Capital Advisors, only 10 were valued at more than $1 billion.

“The sweet spot for M&A is not $1 billion but the $100 million to $500 million to $750 million. That’s were a lot of transactions are taking place,” said Jeff McDermott, managing partner at Greentech Capital Advisors, at the finance forum.