San Diego, Calif. — Several analysts are predicting that Japan may add over 10 GW of photovoltaic (PV) capacity for 2014, exceeding that of China. Exceeding 10 GW means an annual growth of at least 33 percent more than the previous year. In the mist of the temporary hold of grid connection approvals placed by 5 out of the 10 utilities, can Japan still grow to be the No 1 position in the world? 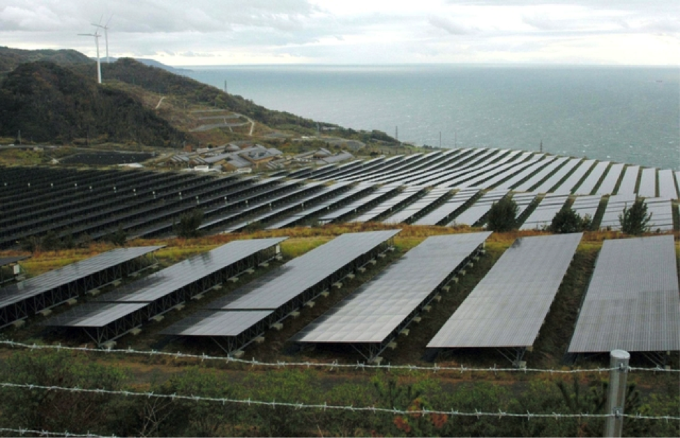 According to the latest figures released by the Japan Photovoltaic Energy Association (JPEA), Japan installed 2.4 GW of on-grid PV capacity in the third quarter of this year (or second quarter fiscal year in Japan). This represents the second largest quarterly PV installation since the nation’s generous feed-in tariff (FIT) program launched in July 2012.

With the strong third quarter result, for the first nine months of this year, Japan installed about 7 GW of on-grid PV capacity. If Japan adds 3 GW more during this quarter, or an average 1 GW each month, Japan will no doubt hit the 10-GW mark.

Data provided by the Ministry of Economy, Trade and Industry (METI) shows a similar picture. METI is a federal agency, which determines the FIT rates and receives and gives approval to the FIT applications nationwide.

Based on METI’s data, the nation installed 5.5 GW worth of PV capacity under the FIT program between January and August of this year or the average monthly installation capacity of 0.7 GW. 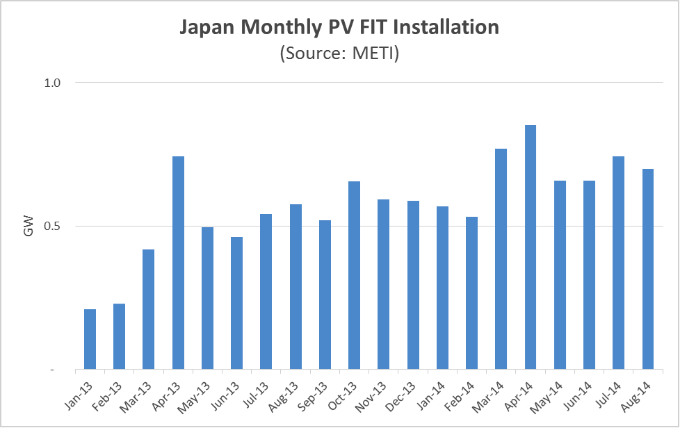 In order to hit the 10-GW mark, Japan needs to add 4.5 GW between September and December or increase its average monthly installation capacity from 0.7 GW to 1.12 MW.

Back in the 90s, Japan led the world’s PV market with strong federal initiatives in response to the oil embargo. The domestic PV market maintained a steady growth, mostly in the residential segment driven by the combination of the capacity-based rebate and net-generation purchase programs.

In 1995, the federal government thought the domestic PV market was self-sufficient and discontinued the residential incentive program, while Germany and several other countries soared ahead with national FIT policies. In 2006, Japan saw its first ever decrease in its annual PV market, losing its rank as the world’s top PV market.

To revitalize the domestic market and bring back the market share it lost, the federal government followed Germany and established the very generous FIT program. The program has created unprecedented demand in less than two short years, but is the nation biting off more than it can chew?

METI has cumulatively approved close to 70 GW worth of projects under the FIT program. Out of the 70 GW, only 18 percent has been completed and became operational by the end of August, leaving 57 GW of PV capacity in the pipeline.

Many industry professionals predict that about half of the approved capacity, in fact, will not be materialized due to the lack of available land space for large-scaled PV systems and restrictions over interconnection. 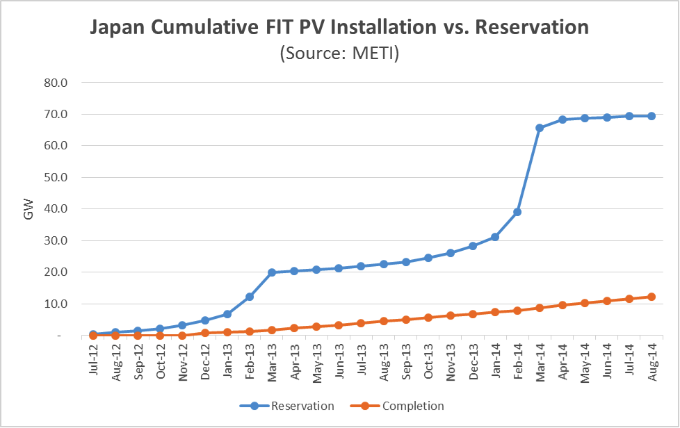 In fact, the latest data by METI shows that the month of August had the lowest reserved PV capacity ever since the FIT program started.

Exceeding the 10-GW mark this year means the nation’s cumulative PV installation capacity will hit 20 GW. This can be translated into PV energy supplying 2 percent of the national electricity capacity. To hit this mark and move forward, the government likely needs to take urgent actions to strengthen the nation’s gird infrastructure and provide clean and secure energy supply.