The amount of solar energy in use will double every 12-18 months for as far out as I can see. 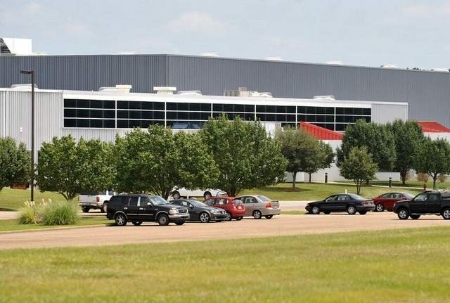 It’s important to put down a marker like this right now, lest the current industry shake-out get you down. That shake-out continued apace when Solyndra announced it was filing under Chapter 11, and expects to go out of business.

(To the right, the site of Stion’s new plant in Hattiesburg, MS, due to go into production early next year.)

Yet the underlying prediction remains sound. In fact, it remains modest for three reasons:

The production of actual panels is not a great business right now, but that’s the stage of the market we’re at. We don’t yet have the industry’s version of a PC — something you can just buy and plug in that will make you money.

The basics of solar technology aren’t concrete. The material mix is unclear; the manufacturing process is unclear. Polysilicon is the dominant platform today, but it’s tough to raise that technology’s efficiency and reduce its costs.

One important point people ignore: The largest U.S.-based solar panel producer, First Solar, doesn’t use polysilicon. They use cadmium telluride and have manufactured more than 4 GW to date. First Solar plans to build more factories, including a 250-MW plant in Arizona, and believes it can tweak the technology to about 18 percent efficiency.

Despite these facts, Chinese companies have rushed into the market with full force, spurred by a government that wants to save its people from suffocating high-sulfur coal pollution which has most cities looking like Pittsburgh, circa 1950. Despite the pain being heard from U.S. producers, they were net exporters to China last year.

Skeptics are going to take the failures at Evergreen and Solyndra, which both took government guarantees to speed production, as proof that solar doesn’t work and that the government should not be involved — that we should be building pipelines to Canada and nuclear plants with those guarantees instead.

The current glut is a short-term problem. The current technology is not the final form. But we know it works, we know all sorts of costs are going to come down, we know there are plenty of buyers, and channels continue to develop.