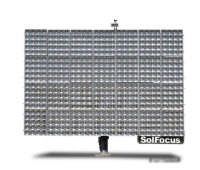 Nashua, NH — Industry media is reporting that SolFocus has officially closed its doors. SolFocus representatives could not immediately be reached for comment. Renewable Energy World will continue to update this story as new information unfolds.

One of the leading concentrating photovoltaic companies in the world, SolFocus previously announced in November 2012 that it was restructuring the business in hopes of finding a buyer.  As part of the restructuring, the company let go 35 people and “the focus of our effort [now] is really around an acquisition,” said Nancy Hartsoch, Senior VP of the company.

SolFocus produces concentrating photovoltaic cells and develops them into projects. In the past 24 months SolFocus has deployed over 15 megawatts of CPV systems in 13 countries globally. The company has achieved quarter-to-quarter growth over the past six quarters, said Hartsoch who has been with the company for six years. “From a traction standpoint, everything has been pretty strong, it’s just been challenging to get to that point of self-sustaining or profitability,” she said.

SolFocus is a privately held company that has grown through investments. Lead investors include New Enterprise Associates and NGEN Partners. The company has not received any significant funding from federal tax credits, grants or other taxpayer funds. To date total investment in the company has topped $200 million. Hartsoch said the company’s investors decided on Friday that the amount of money they were willing to put into the company had “dried up” and “we needed to find debt on the outside.”

The company has had projects banked by leading financial institutions, and will continue to support projects that have been deployed. “Any of our existing contracts, it’s basically business as usual,” said Hartsoch.

The CPV industry is expanding rapidly, according to a recent report from Lux Research, which is forecasting CPV segment growth of 31% through 2017, a rate that is 25 percent higher than the overall PV market.

But solar power is challenged by increasingly low prices right now with too much capacity on the market.  The drive to lower prices in order to gain marketshare, plus the oversupply has led to restructurings and bankruptcies of many manufacturers. “I can look at the charts and say ‘yes, we’re selling exactly where we needed to be selling, the only thing is the calendar’s moved in about 24 months.’”

Hartsoch believes that price wars like what is happening in the PV market are particularly challenging to new technology and she warns of the consequences for all renewable energy.  “To advance new technology when you’re building 10 to 100 megawatts and compete against people building gigawatts is always a challenge,” she said. “Plus when those gigawatts are being sold unprofitably then it’s a huge one [challenge],” she continued.

Hartsoch said that for the most part, the company is doing fine. “We don’t have product problems, we don’t have supply problems, everything we have out there is performing as predicted,” she said. “But the price at which we can sell it is not a point where the company can be profitable,” she explained.  But “it’s not that far off,” she added.

Hartsoch is troubled by the fact that many projects can still be constructed and deliver good investor returns even without PV prices being as low as they are. “We have a tremendous number of projects around the world, in our pipeline not executed projects, where the return is very healthy for the investors and that doesn’t require the price being at the bottom, “ she explained. “But if you get into oversupply and competition, it doesn’t mean you get to hold those prices.”