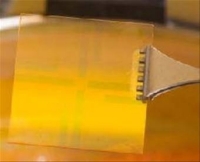 Ohio, United States [RenewableEnergyWorld.com] Scientists at the Air Force Research Laboratory Materials and Manufacturing Directorate (AFRL/RX), in a concerted effort with Plextronics Inc., and the Pennsylvania NanoMaterials Commercialization Center, both located in Pittsburgh, Pa., have developed a ready-to-use, cost-reducing technology that can capture sunlight and store it as energy to power Global Positioning System components, portable communications and other devices for U.S. soldiers.

The agreement between AFRL/RX and the Commercialization Center includes the development of a technology roadmap identifying technologies AFRL/RX needs and is interested in funding. The Center is responsible for reporting these needs to industry and requesting proposals. Next, a team of personnel representing both organizations carefully examines the proposals and identifies those with the most promise to receive funding, Lieutenant Vaiana explained.

This agreement led to the program with Plextronics, whose primary focus is organic solar cell and organic light emitting diodes, and more specifically, the conductive inks and process technologies that enable such applications.

“Plextronics’ new technology represents a significant step forward in printing inexpensive solar cells capable of powering a wide range of portable devices such as cell phones and radios. Key outcomes include lower costs and reduced logistical footprints for military operations across the battlefield environment,” he added.