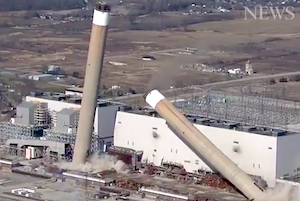 Ontario Power Generation (OPG) this week said it demolished the smoke stacks of the former coal-fired generating station in Nanticoke, Ontario, to make way for the Nanticoke solar project.

OPG and its partner, Six Nations Development Corp., were selected to develop the 44-MW solar facility on the land where the Nanticoke generating station was sited.

“As Ontario nears the 4th anniversary of eliminating coal, few events could be more symbolic than having the stacks brought down at the site of the former Nanticoke Generating Station,” Glenn Thibeault, Ontario’s Minister of Energy, said in a statement.  “At its peak, Nanticoke Generating Station was one of the largest air polluters in North America. Ontario’s elimination of coal for electricity generation remains the single largest climate change initiative undertaken in North America and was the equivalent of taking up to seven million cars off of our roads.”

The Nanticoke Solar Project is currently in the approval phase, and OPG expects to place the project into service in 2019.

You can see the demolition footage in the Tweet below by ABC News:

Big blast brings down two giant smokestacks at a Canadian power plant on the shores of Lake Erie in Nanticoke, Ontario. https://t.co/h6s4EfI0Y4