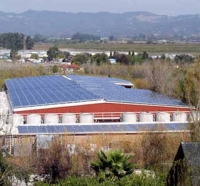 Sonoma, California [RenewableEnergyAccess.com] Even as the California sun rises lower on the horizon and sets earlier in the day, the solar-powered vineyard trend continues. This week a 411 kW solar array for the Cline Cellars’ winery operations reached substantial completion.

Novato, California-based SolarCraft Services designed the system to provide 100 percent of the winery’s annual electricity needs for the winery’s production facility located in Carneros. SolarCraft was able to design a lightweight aluminum mounting structure that works well with the structural capacity of the winery’s steel warehouse and fermentation buildings, while giving the panels a slight tilt directly south. The winery’s roof is roughly 50,000 square feet and now supports just under two thousand Sharp solar panels. The 34,625 square feet of high capacity solar panels will generate roughly 411 kW, offsetting the winery’s entire annual energy consumption. In fact, the solar panels will generate so much energy that the winery also contracted SolarCraft to completely upgrade its electrical infrastructure to support the increased capacity. Cline Cellars first considered the switch to solar in 2003. While researching designers and installers, the winery realized that state rebates per kW were dropping. The winery’s management decided to take action before rebates dropped further. In 2004, Cline Cellars awarded SolarCraft the contract to design and build their system. SolarCraft immediately assisted Cline with the applications for the solar energy rebate program with the Public Utilities Commission. In March 2005 the PUC approved the project. Cline Cellars’ goal is to be energy independent — creating predictable energy and costs. Toward that goal, SolarCraft Services first assessed and reduced the winery’s energy demands. In 2004, SolarCraft advised Cline Cellars to install energy saving lights throughout the facility and add a new urethane, foam-insulating roof that reduces cooling costs in the summer by up to 30 percent. “The current state and federal incentives make solar electric systems a viable investment for all types of businesses,” said Chris Bunas, Director of PV Systems Division at SolarCraft. “With energy costs skyrocketing, smart companies like Cline Cellars are now looking for ways to reduce and set their facility operations expenses for the long term. With 25-year warranties and 40+ year design life on the major system components, this system will be positively affecting Cline’s bottom line for many years to come.” The project features an educational component to it as well. Cline Cellars hosts frequent tours of their onsite “California Missions Museum” for North Bay children who are in the fourth grade and studying California history. A new addition to the winery tour will be a solar kiosk where students can learn about solar power and actually see the amount of energy the winery is generating from the sun. “Solar electric is ideal for wineries,” said Bill Stewart, co-founder and owner of SolarCraft Services. “By utilizing existing roof space to generate electricity onsite, Cline Cellars is helping to reduce peak electricity demand for others, while exhibiting sustainable winemaking and business practices.”