The policy and regulatory debates over solar net metering changes daily as developments unfold rapidly across the country. But one thing is certain: utility companies along with the Edison Electric Institute (EEI) entered this debate fully aware that their business model was under threat from rooftop solar generation.

In fact, 2012 board documents revealed in  The Washington Post shined a light  EEI’s three-step action plan to slow the growth of distributed generation in their members’ territories. While some utility companies are working with state regulators to better protect their customers and provide choices for ratepayers, many utilities are doing the opposite and are looking for reports to send lawmakers and commissioners that defend their outdated business model. A recent released report that is being sent to lawmakers comes from the  Citizens’ Alliance for Responsible Energy (CARE), a 501(c)(3) based in Albuquerque, New Mexico.
CARE sent a  press release on March 10 publicizing their new white paper, “ Solar Power in the U.S.: Lessons Learned and Guidance for Policymakers.” The report is intended to “educate both consumers and lawmakers about the various consequences of using solar energy.”  Marita Noon, Executive Director at CARE and the organization’s 501(c)(4),  Energy Makes America Great, authored the report. Noon is also listed as an “Expert” on  The Heartland Institute’s website.
CARE is a  fossil fuel-funded advocacy organization that opposes environmental activism and says that the pursuit of renewable energy will “end the America we know and love.” CARE also states that if solar and wind continues to emerge:
We will have a new earth–and it will not look much like the country people are risking their lives to get into. It will not be a super-power. Instead it will be a superconciousness, looking more like a hippie commune than the wealthiest nation in the world. 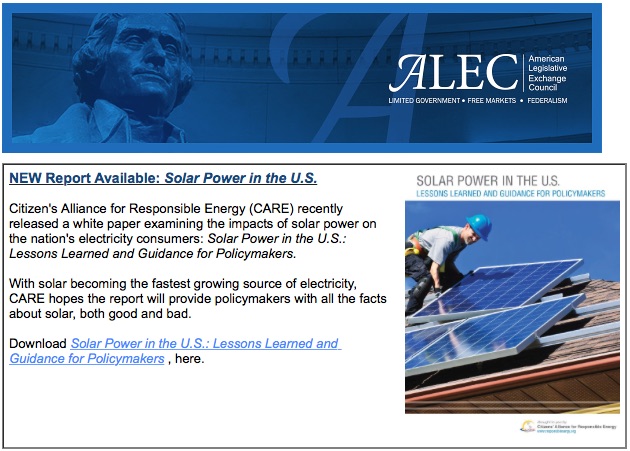 After the release of the report, the American Legislative Exchange Council (ALEC) began sending it to their members. Last year, ALEC’s Board of Directors approved a model bill sponsored by the Edison Electric Institute to repeal net-metering legislation.

In a recent email to members of Energy Makes America Great, Noon writes, “For the past couple of months, I have been quietly working behind the scenes to put together my first white paper: Solar Power in the U.S.–intended to provide a comprehensive look at the impacts of solar power on the nation’s consumers.” Noon mentions that when recently in Florida, she was meeting with legislators discussing the report and explaining to them that solar energy does not work without subsidies, such as the Investment Tax Credit (ITC).

But a report published by Deutsche Bank in October determined that solar energy has already reached grid parity in 10 states. Those states are responsible for 90% of solar power in the country and will see a sixfold increase the next three to four years. More importantly, 26 additional states will see solar energy reach grid parity by 2016. The 36 total states that will see solar energy reach grid parity by 2016 will happen, according to the report, even if Congress fails to extend the Investment Tax Credit, which is set to expire on December 31, 2016.

Noon also makes the claim in her report that distributed solar energy is unfair for low-income households. Karl Cates and David Schlissel at the Institute for Energy Economics and Financial Analysis recently wrote an article debunking the ‘unfair’ claim:

The truth is this: Rooftop solar provides substantial benefits for everyone, regardless of who installs it. It helps power the homes and shops that adopt it, to be sure, but it has far-reaching benefits for other customers as well. If Jane Doe in Anywhere, USA, puts a solar panel on her roof, every other electricity ratepayer within the footprint of whatever regional grid Jane Doe is tied into will benefit as well.

Honest purveyors of utility-industry fact know this, of course, and say it quite often. So, more and more, does Wall Street. No less a titan than Sanford Burstein & Co., one of the perennially best-rated firms in Institutional Investor’s annual rankings of investment researchers, has studied the issue deeply over the past couple of years and comes away with an unequivocal take on the issue: Rooftop solar, aka photovoltaic solar, means lower peak-hour energy prices for all.

Furthermore, Noon calls out the Department of Energy’s Loan Program Office and calls it controversial for some of its loans, specifically highlighting Solyndra. Yet, the DOE program made news last fall when it was announced that the government brought in $30 million in loan guarantee interest payments and could net a total of $6 billion for taxpayers once all the loans are paid. As for the bankruptcy of Solyndra in 2010 that Noon mentions, the DOE program has a 98% success rate and has successfully helped emerging companies by backing private lenders with loan guarantees.

Lastly, to frame where CARE and Noon are coming from with regards to this policy report, CARE compares environmentalists to watermelons describing them as “Green on the outside like environmentalism, red on the inside like neo-communism or neo-socialism.” Noon and her organization are pushing back against solar energy’s growth in defense of a free market. Conversely, distributed solar energy is breaking the monopoly utility companies hold over state energy generation, which is exactly why free market conservatives are defending this technology.