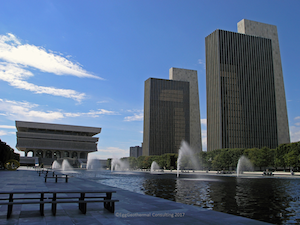 An associate in New York recently sent me a copy of the “Empire State Plaza CHP and Microgrid Project Overview, October 26, 2017,” found on the New York Power Authority’s (NYPA’s) website.

The presentation is designed to share the virtues of the project’s proposed cogeneration capabilities, and cites the proposed savings in Natural Gas (NG) through cogeneration and efficiency measures, stating the NG efficiency would be going up from 50 percent (current) to 80 percent (proposed). The proposal cites a geothermal heating and cooling option as non-feasible with the following statement;

The statements above are one-dimensional and demonstrate a lack of understanding on at least two important points:

The Hudson River is likely an excellent candidate as a heat-source/sink for a geothermal system, and is indeed already piped into the existing plant as the heat-sink for chillers. This is similar in principal to the two year old Nashville Airport Geothermal conversion.

Chillers/heat pumps can be powered by electricity, and could continue to be coupled to the Hudson River as the geothermal energy source/sink for the Plaza. The existing chiller piping may be suitable for new electrically driven chillers. The steam pipes (or the space they currently occupy) in the mechanical tunnels/access-ways would likely be suitable for the heated water to be fed from the proposed geothermal system. Any modifications needed to existing steam piping and heat distribution equipment and specialties would be determined in the RFP for a geothermal upgrade. This Times Union article entitled, “Journey to the center of the Empire State Plaza” provides useful insight into the Plaza’s mechanical systems.

Geothermal provides all of the heating and cooling needs for millions of commercial and residential buildings worldwide. Geothermal systems eliminate the need for combustion heating by “pumping-heat” from the earth or bodies of water. The earth is a renewable energy source that is recharged from solar energy, making geothermal a fundamentally solar-thermal technology.

To say geothermal is not capable of producing high energy steam is equivalent to stating that an electric car does not have a radiator and therefore, no waste heat is available from an internal combustion engine. An electric car uses a heat pump to heat and cool the car’s cabin. Geothermal systems use “heat-pump” technology and can provide all of the heating and cooling needed for a building.

With 37 percent of New York’s GHG emission coming from combustion heating, and goals of 40 percent reduction by 2030 and 80 percent by 2050, simple math makes it clear that New York’s own GHG emission reduction goals will not be met if combustion remains the principle means of providing heat for buildings. That will make this investment (into cogeneration and natural gas turbines) one that will likely have to be replaced long before it reaches its useful life span. That is a “Stranded Asset.”

In summary, it is reasonable to assume that geothermal heating and cooling can be accomplished at the Empire State Plaza. But the current timeline will have to be interrupted, and a Request for Proposals (RFP) for a geothermal HVAC upgrade will need to be issued.

What a remarkable opportunity for the State Capital to lead the way in New York’s efforts to reduce greenhouse-gas emissions. I would suggest that the citizens of New York and elected leaders help the New York Power Authority (NYPA) and New York State Energy Research and Development Authority (NYSERDA) to make this a reality by voicing their support of a geothermal sourced heating and cooling system for the Empire State Plaza.