New Hampshire, U.S.A. — Prices for crystalline-silicon (c-Si) solar photovoltaic (PV) modules fell below the $1/W mark in January 2012, and in some cases well below even that, marking the first time that global average prices have fallen below this milestone, according to IMS Research.

With the market now stuck in overcapacity and oversaturation with solar PV modules — so much so (some say tens of gigawatts) that Tier-1 producers and overstocks can fill demand all by themselves — Chinese Tier-2 suppliers have desperately kept up their pricing one-upsmanship to simply keep themselves in the game at the expense of rivals. As a result, average c-Si PV module prices from this tier of suppliers has declined at double the pace of the total market — $0.96/Watt in January 2011, though some spot prices were seen as low as $0.80/W, typically for large orders from German distributors, says IMS. (Note that sub-$1/W is largely seen as significantly below actual manufacturing costs — First Solar is an important exception and thus the benchmark — and is therefore unsustainable for many if not most manufacturers.)

(Further back up the chain, actions are already being taken to help ease pricing and capacity pressures. Reports suggest that Chinese polysilicon producers have taken up to 30 percent of their capacity offline, in the face of a 60 percent plunge to prices of and below $30/kg, and they may not come back online until prices rebound to nearly $50/kg.)

Annualized price declines slowed to 22 percent in January, ignoring seasonality, after exceeding 50 percent declines in December, thanks to reductions in incentives across several major solar PV markets at the end of 2011. PV modules prices spiked in December, amid the flood to get systems in the ground to qualify for expiring incentives. But the scales flipped in January and distributors’ prices fell faster than manufacturers’ prices in January, notes IMS research analyst Jessica Jin. Average distributor prices for Chinese Tier-2 c-Si modules, though, were still 20 percent higher than manufacturing pricing, she adds.

Price declines actually slowed down in January compared to previous months, buoyed by strong demand in Europe. Germany installed more than 7GW of solar capacity in 2011, far more than the government’s target, and heated discussions are still underway about slashing Germany’s incentives to keep solar growth from racing beyond capabilities to accommodate it. Those impending changes, coupled with “attractive returns” for system prices in Germany — still the world’s largest solar PV end-market, ahead of hard-charging China — “is driving demand to remain unusually high in the first few months of the year,” Jin said. 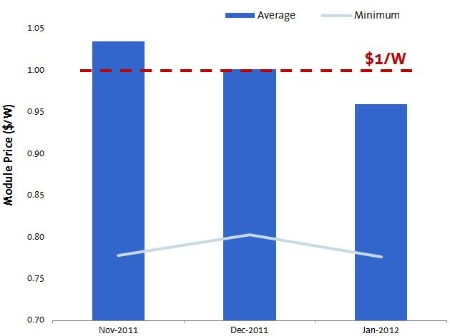