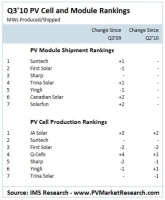 December 20, 2010 — Chinese crystalline PV giants, Suntech andJA Solar, topped the rankings for PV module shipments and PV cell production in Q3’10, according to the latest quarterly report from IMS Research . Suntech increased its PV module shipments by an impressive 25% over the previous quarter, to retain the top position, which it had first claimed in the second quarter of this year.

Demand for PV modules remained very strong in the third quarter and shipments climbed once again by 20%, reaching 5.4 GW. As a result of this high demand, the ten largest suppliers all increased their shipments in the quarter. All of the companies which improved their rankings since Q3’09 are Chinese. In fact, five out of the top seven suppliers in Q3’10 were Chinese crystalline suppliers.

While the PV module shipment rankings remained unchanged compared to the previous quarter, a new leader of the PV cell production rankings emerged in Q3’10. JA Solar, another Chinese crystalline manufacturer, increased its cell production by a massive 35% to top the rankings for the first time. First Solar, which had previously led the rankings, was also surpassed by Suntech, and fell to third place in the quarter. A further notable gain came from Q-Cells, another previous leader, which became the fourth largest cell producer in Q3’10, continuing its recovery having lost considerable market share throughout 2009.

“Once again, records were broken throughout the PV industry in the third quarter,” remarked one of IMS Research’s PV analysts, Sam Wilkinson. “Whilst all of the ten largest PV module suppliers recorded record module shipments in Q3’10, Chinese suppliers continued to dominate the industry and both the largest module supplier and largest cell producer were Chinese in the quarter. In fact, Chinese suppliers shipped over half of all modules in the third quarter,” continued Wilkinson.

Chinese dominance aside, the outlook continues to be bright for the industry; IMS Research forecasts that PV module shipments will reach 18.9 GW in 2010, nearly twice the amount shipped in 2009, and although growth will slow in 2011, shipments are still forecast to continue increasing at double-digit rates.