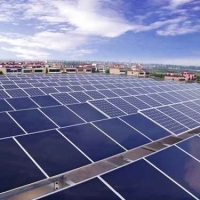 Shanghai, China [RenewableEnergyWorld.com] Increasingly thin-film photovoltaics (PV) operations are popping up across China, indicating active development in this sector, which is expected to provide affordable solar power and be used widely in the future.

Most experts believe that skyrocketing polysilicon prices in 2008 increased the price advantage of thin film, pushing Chinese manufacturers to adjust their product mix.

“Despite the fact that China’s polysilicon price slumped from US $480 per kilo in 2008 to US $60 per kilo now, thin-film producers still enjoy price advantage as its production cost is 20% less than that of silicon modules,” continued Mr. Jiang.

In addition, it is expected that the production cost of thin-film will continue dropping, as Chinese producers are now putting more resources into R&D and partnering with manufacturing equipment suppliers.

“Our production cost of each watt of thin film is about 8 yuan,” said Dr. Liyou Yang, CEO of Astronergy Solar. “But in 2011 or 2012, we can cut the production cost to about 4 yuan per watt, by technology improvements and developing a domestic supply chain to reduce the cost of raw materials and equipment.”

Wanting to capitalize on this declining production cost, Astronergy Solar plans to increase its annual thin-film capacity from 30 MW now to around 1,000 MW in the next three years, a rise of 3,233%, according to Dr. Yang.

See the table below for a list of some of the Chinese thin film PV manufacturers that have already started producing product.

The rising demand in thin film is also being driven by its technical advantages — such as tolerance to harsh environment, better performance in lower light conditions and flexibility — over its “thick-film” counterparts. This is luring Chinese PV manufacturers that want to better answer market needs aboard and at home into the thin film sector.

For example, Hebei-based Baoding Tianwei Group Co., Ltd., a silicon module producer, established its first thin-film subsidiary in 2008 and recently signed a three-year contract with Thai Green Energy Co., Ltd., in which more than 70 MW of thin film will be supplied for the Southeast Asia market.

Along with overseas orders, the Chinese market growth also contributes to thin-film sales.

Astronergy broke ground on a 10-MW solar farm in Ningxia province, in which 3 MW of thin film will be used. According to Dr. Yang, the company CEO, the Chinese market is expected to account for one third of the total thin-film sales in 2012, while the U.S and Europe will also account for a third each.

U.S. First Solar enjoys great success as a top thin-film producer, but it is hard for Chinese thin film producers to achieve the same, due to their limited production scale, shortage of advanced technology and heavy reliance on imported equipment and raw materials.

Shenzhen Topray Solar Co., Ltd., a top Chinese thin-film producer that self-developed 70% of its production equipment, had a gross margin of 23.8% during the third quarter of 2009. However, at the same time, First Solar’s gross margin was 50.9%.

While, other thin film producers that fail to develop their own production equipment may face a worse situation.

Most of China’s thin-film manufacturers have to buy expensive equipment from foreign companies such as U.S. Applied Materials, Switzerland’s Oerlikon and Japan’s Ulvac Inc., making their upfront investment ten times higher than that of silicon module producers, according to Sinolink Securities’s analyst Zhang.

Also, China’s thin-film producers greatly depend on foreign suppliers, which could potentially cause short supply in major raw materials such as target materials, conductive glass and silane gas, said Zhang. His research shows that Germany’s Heraeus supplied over 60% of China’s target materials in 2008. In terms of conductive glass, Japan’s NSG Group and U.S. AFG Industries, Inc. hold a large market share in China, he said in a report.

Yotam Ariel is an independent business consultant solely focused on solar PV. Based in Shanghai and fluent in Chinese, he has been conducting business in China for more than 4 years, assisting his international clients with market intelligence and government issues such as regulations and incentives. He is highly active in the renewable energy and greentech circle, keeping a close eye on this highly dynamic industry. Coco Liu is a professional writer, primarily covering energy and agribusiness in China.