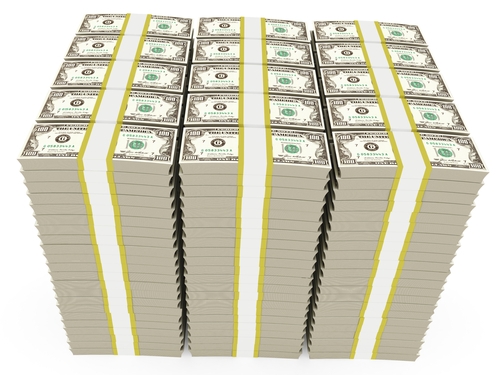 NEW YORK — JinkoSolar Holding Co. climbed to a six-month high after it won as much as $1 billion in financing from China Development Bank Corp., a sign that the Chinese government is placing bets on specific manufacturers.

JinkoSolar’s American depositary receipts jumped 14 percent to $4.68 at the close in New York, the highest since May 17.

Solar manufacturers are contending with a global oversupply that’s driven prices down 19 percent in the past year. The agreement is part of the Chinese government’s effort to provide support for selected manufacturers as it picks the companies most likely to survive the current slump, said JinkoSolar Chairman Li Xiande.

“We believe they chose Jinko because we have a healthy balance sheet and strong business development management in the downstream sector,” Li said at a media briefing in Zug, Switzerland. “The survivors will be the players who have the advantage in terms of technology, cost and branding. The biggest may not survive.”

JinkoSolar, the eighth-largest panel maker by volume according to Bloomberg New Energy Finance, plans to use the funding to develop and build solar farms, mostly in Germany, Italy and Spain, Li said. The funds will go to JinkoSolar’s Swiss subsidiary over a five-year period, according to a statement today.

“Today’s announcement could demonstrate a significant signal that the Chinese government is starting to choose the winners from the solar industry,” Philip Shen, an analyst at Roth Capital Partners in Newport Beach, California, said in a note to clients. He has the equivalent of a hold rating on JinkoSolar.

First Solar Inc., the world’s biggest maker of thin-film panels and solar power plants, has received similar financing from the Export-Import Bank of the U.S. The Tempe, Arizona-based company has won more than $583 million in loan guarantees from the bank for projects in Canada and India. The Washington-based lender last year more than doubled its funding for U.S. renewable-energy exports to $720 million.

“Access to financing along with cheap modules will make the Chinese a force to be reckoned with in emerging market project development,” said Ben Schuman, an analyst at Pacific- Crest Securities in Portland, Oregon. “If CDB does expand this type of activity I think it would be bad for First Solar.”

Chinese solar manufacturers gained on the sign of China’s support for JinkoSolar. Trina Solar Ltd. climbed 9.9 percent to $3.10 and LDK Solar Co. rose 11 percent to $1. The financing helped lift the Bloomberg Industries Large Solar Energy Index of 17 companies to its highest in a month. The volume of JinkoSolar’s ADRs, each worth four ordinary shares, was 10 times more than the 3-month average daily.