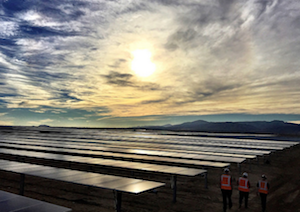 First Solar Inc. has lost almost a quarter of its market value in the past week. SunPower Corp. is slumping too, as are the big Chinese solar companies that trade in the U.S. and Asia.

The industrywide slide shows that trade barriers designed to protect specific companies or industries can be overpowered by the global forces that drive the markets. Slower demand in China will increase competition, exacerbate a panel glut and drag down prices. That will mirror the conditions that prompted some struggling U.S. panel makers to seek tariffs last year.

China’s cutback “has shaken global markets,” Joseph Osha, an analyst at JMP Securities LLC, said in a research note Wednesday. “Pricing pressure is likely to accelerate outside of the U.S., and even inside the U.S. pricing may decline as Chinese suppliers look to compensate for a sharp decline in expected demand in their home market.”

First Solar had been riding high on strong demand and pricing for its panels, especially since the tariffs imposed in January don’t apply to the thin-film products the Tempe, Arizona-based company produces. In October it announced record orders as U.S. trade policies drove up demand for its panels.

On June 1, China pulled the plug on global demand by eliminating about 20 GW of expected domestic installations this year, according to Bloomberg New Energy Finance. That will reduce global prices 35 percent, to 24 cents a watt by yearend.

The pullback prompted analysts to downgrade First Solar, including the double drop by Osha to the equivalent of sell from buy. The company has slumped more than 16 percent since China’s announcement.

SunPower, the second-biggest U.S. panel maker, is down 12 percent over the same period. American depositary receipts for JinkoSolar Holding Co., the Chinese company that’s the biggest publicly trader solar company, are down almost 20 percent. The Bloomberg Global Large Solar Energy index is having its longest losing streak in more than eight years.

At least one analyst sees that as a buying opportunity. That’s because U.S. panel buyers worried about supply shortages drove up prices last year, and are locked into contracts with First Solar for the next few years, according to Roth Capital Partners LLC’s Philip Shen, who reiterated on Wednesday his 12-month price target of $90.

“The Chinese policy changes are a red herring,” Shen wrote in a note. “We conducted some recent checks and came away with confidence that the contracts First Solar has executed will remain in place.”