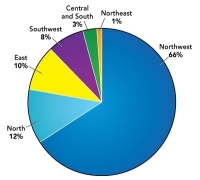 There are 1007 nonresidential projects in China in some form of installation or development, says Solarbuzz, including those tender-processed and planned without tenders. Of those, 707 are >1GW. Nonresidential PV project activity is now evident in 29 Chinese provinces. (Officially China has 22 provinces — a definition also assigned to Taiwan — plus a handful of municipalities, autonomous regions e.g. Tibet, and “special administrative regions” i.e. Hong Kong and Macau.) The Northwest region, notably the provinces of Qinghai, Gansu, Ningxia, Inner Mongolia, and Sichuan, is ripe for utility-scale projects, home to “intense solar radiation” not to mention vast amounts of land, and thus currently accounts for two-thirds (66%) of that pipeline. Most leading project developers are state-owned, with the top 10 firms accounting for 8.7GW of the total pipeline.


“The earlier-than-expected release of the national PV FiT policy has opened the door to explosive growth in project development activities in China,” said Solarbuzz analyst Ray Lian, in a statement. The result: more tenders and accelerating PV orders. (The Chinese PV market will exceed 1.6GW, an impressive 230% growth vs. 2010.)