With ten highly prominent initial public offerings (IPOs) racked up already, China’s solar energy industry is poised to make a major impact on worldwide polysilicon capacity and solar cell production. However, determining who will succeed among the new firms in the domestic and international market remains highly uncertain as it is likely that at least some publicly announced plans will not materialize into actual projects, write Tom Morrow and Dylen Liu.

In the last two years, China’s ten IPOs have raised nearly US$2 billion to meet the world’s growing demand for PV-related products and services. The attractiveness of PV to Chinese industrial policy is also understandable due to China’s internal demand for energy, the exciting global economic projections for the solar industry, and the alignment of PV manufacturing needs with China’s current industrial and technology capabilities. Indeed, China’s domestic market for accumulated PV installation is expected to reach 300 MW by 2010, up from only 80 MW accumulated and 10 MW yearly installation in 2006. But the Chinese PV industry is planning to more than meet its domestic needs.

Since 2004, the country’s solar cell production and capacity have reached growth rates from 100%–400% per year, contributing to the global shortage of polysilicon feedstocks. Cell capacity of 4 GW has been announced for this year and, after growing a projected 40% in 2008 so far, China’s solar wafer capacity is also expected to reach 4 GW. However, how much polysilicon will be available and who will be able to obtain it remains extremely uncertain.

Furthermore, the SEMI analysis of the Chinese PV market is currently in progress and these estimates are preliminary. Investment for these projects comes from a variety of sources, especially silicon manufacturers, traditional energy producers and chemical companies. Of these 27 projects, seven projects will rely upon China-based technologies, while six will source technology from Russia, five from the Europe or the US, and four projects will be a partnered combination of Chinese and international technology. These projects will be located throughout China, with the leading regions being the western part of the country, which will see 11 projects, and the Yangtze delta, with four projects.

However, as of December 2007, 20 of these projects had begun construction and of the identified 27 polysilicon projects that have been announced – equating to nearly 30,000 tonnes of polysilicon capacity by the 2008 year-end – SEMI estimates less than 5000 tonnes will actually be produced this year. By 2010, of the 70,000 tonne capacity that has been announced, SEMI projects that only 30,000 tonnes will reach the market. In response to the discrepancy between announced and expected capacity, nearly all Chinese cell and module manufacturers have entered into long-term, expensive, supply contracts, although these contract prices are still much lower than the spot market prices, which were around $400/kg in December 2007.

Nonetheless, the list of new developments in China continues to grow. This month, for example, the DuPont chemicals company announced it will soon begin construction on a PV research centre in Hong Kong and a manufacturing facility in Shenzhen to support ‘the rapidly growing photovoltaic (PV) solar energy industry.’

DuPont expects growth in the photovoltaic market to exceed 30% in each of the next several years and the company has made significant investments in product development and capacity expansions to help keep pace with the demand.

The company says that expansions in Hong Kong and Shenzhen will provide new offerings to serve the amorphous silicon (a-Si) thin film market, adding that the growth rate for thin film is projected to be approximately twice as high as demand for c-Si. DuPont expects this increase to drive specifications for both new and existing products that serve the thin film industry.

‘Through investments in materials, technology development and manufacturing, DuPont is accelerating its ability to deliver innovations that will improve the lifetime and efficiency of photovoltaic modules, and also have enough production capability to help keep pace with the fast rising global demand,’ said David B. Miller, group vice president of DuPont Electronic & Communication Technologies.

In addition to polysilicon, China will also benefit from localized silicon crystal growth. Xi’an University of Technology, Jingyi and Jingyuntong are all qualified vendors for mono crystal ingot growth equipment. Silicon ingot capacity will reach 20,000 tonnes in monocrystalline and nearly 23,000 tonnes in polycrystalline in 2008. In addition to polysilicon, solar grade wafers and solar cells and modules, China is expected to witness the development of an emerging domestic equipment industry, representing the entire production process including thermal processes, plasma etch, wet bench, PECVD and semi-automated screen printing. Supporting equipment and component vendors are also expected to emerge in China.

Indeed, in April Trina Solar announced that five of its key suppliers have signed investment agreements to establish production facilities in the Changzhou Trina Photovoltaic Industrial Park. The suppliers, which include Guangzhou ChienSong Grind Material Co., Ltd., Hubei Feilihua Quartz Glass Co., Ltd., Ltd., Suzhou Good-Ark Electronics Co., Ltd., and a European manufacturer of PV glass, produce products such as reclaimed slurry, crucibles, junction boxes, and low iron glass used in the production of solar PV modules. These companies are targeting total investments of over US$275 million in Changzhou. ‘We are very excited by the advancement of the Changzhou Trina Photovoltaic Industrial Park and the opportunity to form strong partnerships with each of these key suppliers,’ said Jifan Gao, Trina Solar’s Chairman and CEO.

The five suppliers plan to build production facilities in Changzhou and enter into long-term supply agreements with Trina Solar. Their presence in Changzhou will Trina ensure a steady supply of its key supply chain components, while providing the company with lower material costs, among other logistical advantages.

The business model for many of these new solar energy firms, such as Suntech, Yingli and Jing’ao, follows a vertically integrated path. Some companies such as LDK or CSUN, however, are planning to specialize in a limited number of steps in the supply chain.

In a recent survey of Chinese manufacturers by SEMI, 88% of panel suppliers are set to lower or stabilize prices by reducing waste, with 28% saying this will form part of their strategy, a further 27% intend to increase automation, 25% upgrading management systems and a fifth aiming for vertical integration

Chinese PV manufacturers are also garnering recognition on the global stage. For example, based on its recent analysis of the solar energy development market, Frost & Sullivan recognized Suntech with the 2008 Global Frost & Sullivan Company of the Year Award for solar energy development. Each year, Frost & Sullivan presents this award to the company that has demonstrated unparalleled excellence in design and delivery of high-quality PV, in this case for Suntech’s low-cost, high-quality, innovative, and energy-efficient PV cells and modules and system integration solutions.

‘The company’s pioneering success in developing energy-efficient, cost-effective and customizable building integrated photovoltaic (BIPV) systems and crystalline PV cells, and modules for solar energy conversion into electricity are highly commendable,’ says Frost & Sullivan Research Analyst Mary John, adding ‘It has gone beyond just meeting global energy needs to anticipating them as well.’ The company is export focused and ranks among the top three suppliers in the three largest solar markets – Germany, Spain, and the United States.

In conclusion, while the global PV industry is certain to grow over the next several years, considerable uncertainty surrounds the Chinese market. Polysilicon shortages will remain in effect for the next 18 months and sources of future supply in China have not yet reached high confidence levels. Average efficiency of China-based PV technology is approximately 16–17% and top tier players are expected to improve this to 19% by the end of this year. Aside from materials, human resources will always remain limited in such a rapidly expanding industry. There will be a tough year from second half of 2008.

Even so, China’s solar cell capacity is expected to grow by some 68% in 2008 and with polysilicon constraints set to ease in the second half of 2009.

Chinese solar cell manufacturers need to cooperate with equipment & material vendors to improve the productivity and reduce the cost and the whole industry should collaborate to both advocate government policy to support a domestic market and improve competency in cost reductions.

Nonetheless, regardless of the ultimate scope and nature of the future industry, China’s role in the global industry will certainly grow and – like most industrial segments in China – achieve global impact. 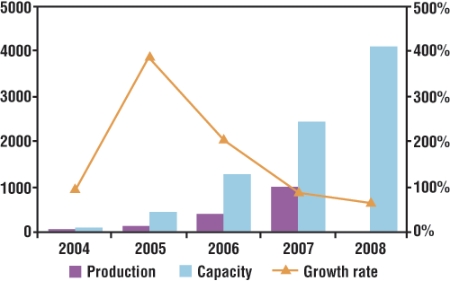 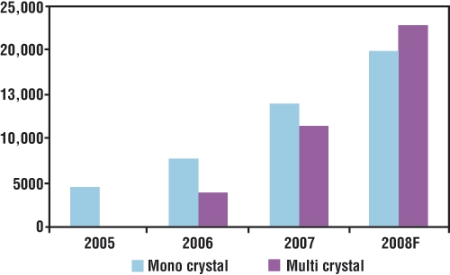