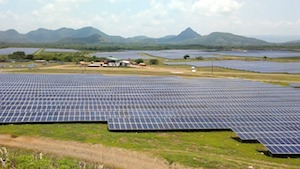 China’s plan to introduce a system to monitor and evaluate the solar-power market will help direct new investments to regions where fewer plants are idle, according to industry researchers.

The policy, which targets mostly ground-mounted projects, will provide data on where to avoid and where to invest, so it “will alleviate some idle solar capacity,” said Peng Peng, director of policy research at the Chinese Renewable Energy Industries Association.

The National Energy Administration said last week it plans to allocate its annual solar power installation quota based on a review of idle rates and other conditions across the country. The agency will cut some or all quotas in regions with high solar-power curtailment rates and in areas that score poorly on factors such as land conditions, local-government services and success in reducing clean-energy subsidies.

Curtailment, where more solar capacity is available than local electricity grids can handle, has carried a heavy cost for China. The nation wasted 3.28 TWh of solar energy last year, according to Bloomberg New Energy Finance.

The NEA said last month that China is introducing a clean-energy quota system to ensure provincial targets and ease the idle-capacity problem.

The main purpose of the evaluation system is to “help promote rational investment” in solar, said Yvonne Liu, an analyst at BNEF in Beijing.

There will be a lag between guidance generated by historical data and potential investments, she said. Investors need more forecasts about the market, more transparency about the number of projects awaiting new quotas and more details within each region to determine whether to develop a new project, Liu said.