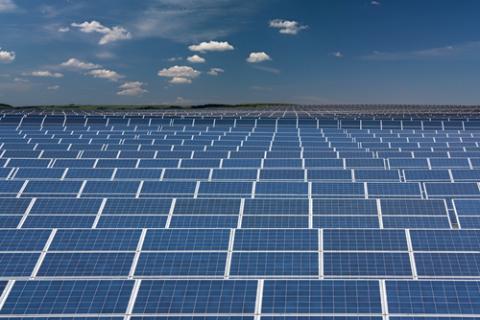 BEIJING — China’s solar-panel makers are investing more in building their own power projects, expanding sources of revenue and soaking up some of the manufacturing capacity that depressed panel prices.

The push is being led by companies such as Yingli Green Energy Holding Co. and Shunfeng Photovoltaic International Ltd. Combined, China’s top five panel producers are planning at least 4.6 gigawatts of projects this year, enough to power 5 million homes in the nation and almost quadruple the capacity completed last year.

State planners in Beijing are pushing the expansion with the China Development Bank Corp. extending 7.57 billion yuan ($1.25 billion) in new loans since December, the same system the nation used to wrest control of solar panel manufacturing away from German, U.S. and Japanese companies in the last decade. The move will solidify the finances of the manufacturers after a plunge in the cost of the technology triggered losses across the industry for more than two years.

“This year offers the best chance to further develop solar projects,” Shunfeng Photovoltaic Chairman Zhang Yi said in an interview earlier this month. “The financing environment has improved to a greater extent compared with 2013. Difficulties have started to loosen up a lot.”

China’s government in June pledged to offer easier financing. Since 2010, the China Development Bank has committed $68.8 billion of credit lines to solar, wind and other clean energy companies though the exact amount of loans disbursed isn’t known, according to a research note published in April by London-based Bloomberg New Energy Finance.

“In the short term, manufacturers have a strong incentive to drive this business model innovation even if in the long term they want to spin out their development divisions,” Jenny Chase, lead solar analyst at BNEF, said in an e-mail. “Photovoltaic plants built by manufacturers in 2013 will probably be sold to long-term yield investors as quickly as possible.”

China is stimulating domestic panel demand after prices tumbled more than 60 percent in the two years through 2012 on slower exports and a production surplus. China’s top five panel manufacturers completed 1.29 gigawatts of solar farms last year, according to data compiled by BNEF.

Yingli Green Energy Holding Co., based in Baoding, China, Trina Solar Ltd. and Shangrao, China-based JinkoSolar Holding Co. had combined losses of $2.85 billion in the two full fiscal years to Dec. 31, 2012, according to data compiled by Bloomberg based on company statements.

Signs of a turnaround are emerging. Yingli will post its first profit since 2011 as early as next quarter, Chief Financial Officer Wang Yiyu said in a Jan. 7 interview. Trina and JinkoSolar have returned to profit. Canadian Solar Inc., which has most of its manufacturing in China, posted its first quarterly net income in more than two years in November.

“Banks are more active because the government is backing the development of renewable energy to cut emissions and ease smog problems,” Xie Jian, president of JA Solar Holdings Co., the largest photovoltaic-cell provider by capacity, said in an interview.

Shanghai-based JA Solar is targeting about 20 percent of its sales from project development this year, generating an internal rate of return of 8 percent to 10 percent with loans, Xie said.

Shunfeng, which has almost completed its purchase of the main unit of what was once the world’s largest photovoltaic maker, said on Jan. 7 that its units will get 980 million yuan from China Development Bank for 130 megawatts of solar projects in the northwest region of Xinjiang. The company plans to spend about 25 billion yuan on 3 gigawatts of projects this year, Zhang said in the Jan. 15 interview.

“The loans benefit producers because power plants are costly and have long payback periods,” said Meng Xiangan, vice chairman of the China Renewable Energy Society, which acts as a liaison between the government and industry.

“Profit margins are thin for panel makers after two years of consolidation,” Yingli’s Wang said. “Companies can only seek vertical expansion if they want to earn more money.”

Yingli and JA Solar will sell most of the projects they develop after completion and retain a small portion, executives at the companies said.

Developers of ground-mounted plants will earn a project internal rate of return of 8 percent without using loans while “cash-constrained manufacturers should be cautious about their business models as it’s very risky to hold the projects,” Wang Minnan, a Beijing-based analyst from BNEF said by phone in a Jan. 16 interview.

“Installations will continue to rise,” with major markets in China, Japan and the U.S. soaking up overcapacity, said Chen Kangping, chief executive officer of JinkoSolar, which said on Jan. 13 that it’s considering a spinoff or public share sale of its project development unit to expand the business.