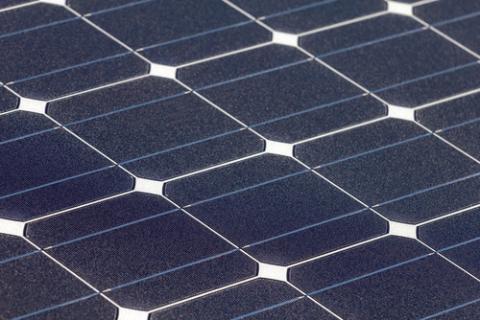 Panel prices have plunged, and now make up less than half the cost of a system, he said in an interview yesterday at Bloomberg’s offices in New York. Customers are no longer seeking the cheapest solar panels, they want the cheapest solar energy.

Chinese producers have been accused of selling panels in Europe and the U.S. below cost. Offering ever-lower prices has become a money-losing strategy for most solar companies, Werner said. All of the China-based manufacturers in the 17-member Bloomberg Industries Global LargeSolar Energy Index are expected to report losses this year.

SunPower, based in San Jose, California, focuses on delivering the most efficient panels in the industry. That lets customers produce electricity at lower prices, and makes his products more appealing, Werner said. The company said in May it may post a profit this year, its first since 2010, on sales of $2.6 billion to $2.7 billion, up from $2.42 billion last year.

Expenses including labor and customer acquisition make up a greater portion of the cost of solar systems. Spending less on photovoltaic components won’t have much affect on the bottom line, Werner said.

“You look kind of silly saying ‘my module costs are lower,’” he said.

SunPower’s panels use cells that convert as much as 24 percent of the energy in sunlight into electricity. The company expects to reach 25 percent in “a few years,” Werner said. Yingli Green Energy Holding Co., the world’s largest maker by shipments last year, sells panels with efficiency rates as high as 15.4 percent.

SunPower typically charges more for its panels and Werner said the higher efficiency justifies the price tag. “You pay a premium, but you’re not paying too much,” he said.

Panel prices make up about 20 percent to 25 percent of the cost of a solar system, compared with as much as 70 percent in 2010 and 2011, Ben Kallo, an analyst for Robert W. Baird & Co. in San Francisco, said in an interview.

That means companies like Yingli are facing headwinds compared to rivals like SunPower and First Solar Inc. that have done a better job of expanding into building and selling power projects, Kallo said.

The low-cost producers are “in a rough spot,” he said. “The extra few cents a watt at this level are not a differentiator when choosing panels.”

SunPower expects to see more consolidation and more failures among Chinese producers, Werner said. The main unit of Suntech Power Holdings Co., the largest panel maker in 2011, was pulled into bankruptcy proceedings in March after missing a bond payment.

“The Chinese economy has decided that loaning money to companies that lose money is a bad idea,” Werner said.

SunPower shares have quadrupled this year. The company is majority-owned by the French oil company Total SA. First Solar is the largest U.S. solar manufacturer.