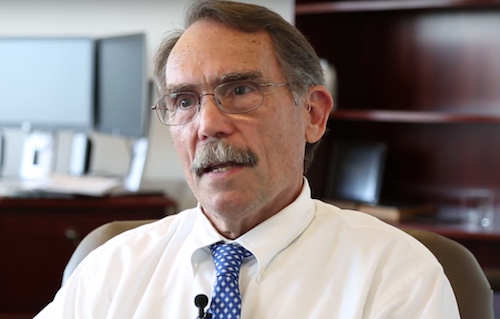 The SunShot Initiative welcomes Dr. Charlie Gay, the program’s new director, a solar industry pioneer who has witnessed its rise from a niche technology that powered microwave repeaters on isolated mountaintops to the robust business it is today. Driven by his passion for sound science and good insights acquired over the last 40 years, Dr. Gay has followed a path that now seems inevitable.

In the 1970s, the nuclear industry was hiring the best talent out of the top universities. Elite graduates who wanted to tackle engineering and basic science challenges went to large corporate research labs and pushed the boundaries of nuclear energy. As a student getting a Ph.D. in physical chemistry (thermodynamics) from University of California Riverside, Dr. Gay was primed to join a big energy company, but he ignored the call and joined Spectrolab, a small solar company.

At the time, the market for solar energy was limited to people who just needed just a bit of electricity to power specific devices—customers like the Air Force that used solar to power satellites. Dr. Gay developed a new way to weld solar cells for the satellites, which made them more resistant to potential enemy laser attacks. He spent the next 18 months working across the company’s manufacturing facilities, learning everything from how to grow crystals to how to make cells and panels. “Almost everything I’ve needed to know for my career I learned by being free to work in each of the operating sections in that factory,” he said in a recent interview.

From this first start on the manufacturing floor, Dr. Gay has remained committed to the solar industry. This commitment was bolstered by early-stage strategic planning he participated in as the vice president of research for ARCO Solar from 1977 to 1984. Atlantic Richfield Company (ARCO) is an American oil company that saw the potential of solar in the 1970s. Through a robust market evaluation process and a “give something a try” attitude, the company had identified solar as a high-tech opportunity that warranted greater research. ARCO hired Dr. Gay to pursue scientific research on solar and supported work that earned him seven of his 16 patents, which spanned solar manufacturing to thin-film solar cell development. Many of these innovations went on to become industry standard and are still in use today. His first patent created a simple way of separating the edges of a solar cell so they didn’t short circuit.

This commitment to solar took on greater meaning in the 1990s when he—like much of the rest of the world—started to have a growing awareness of the environmental impacts of the energy system. He attended the first United Nations environmental world conference in Rio de Janeiro, known as the “Earth Summit,” in 1992. The conference established world-wide principles to guide countries in future sustainable development and created the Framework Convention on Climate Change (UNFCCC). At the time, he was president of Siemens Solar and had established operations around the world to provide solar energy to people in rural areas. In that role, he saw that the benefit of providing energy to these rural villages was great and did not cause the same degree of environmental damage as that of fossil fuels. In addition, it also helped the solar manufacturing industry to hit a critical price point that enabled it to win market share in these areas.

Perhaps the biggest lesson Dr. Gay has learned over the course of his career is that the growth of solar is predictable. “Once it hits a price point that is competitive with the alternative source of energy, solar can continue to win market share because it is a manufactured product,” he said. “For the first time in history, humans don’t have to burn something up to make energy. You can make something that can make energy.” Dr. Gay also pointed out that solar costs have come down in an incredibly predictable way—for every cumulative doubling of how many solar panels have been made, the costs have fallen by 20 percent. “It doesn’t matter what it is–the more you do the more you learn, the smarter you get and more the supply chain evolves in such a way to make it easier, which makes it cheaper.”

At SunShot, Dr. Gay hopes to be in the director’s seat when all of the potential for solar energy comes together. “There’s a maturation of the technology initiatives that got started in the 1970s that have scaled successfully in a number of areas,” he said. “Now we have to do something with it—and we have to do something sooner rather than later.” He identified grid integration technologies and stakeholder engagement as key areas for SunShot to focus on. “Now the industry needs DOE,” Dr. Gay said. “Basically, it needs technologies to put all of these pieces together in the grid network. And DOE is in a role where you can see those pieces and develop the relationships between the grid and distributed generation.”

With the growing impacts of climate change, Dr. Gay has walked the walk himself—he installed SunPower solar panels on his home in California 10 years ago—and it saves him money. “I have somewhere between a $1 to $1.06 per month utility bill,” he said. While 40 years ago he may not have been aware of the critical role solar would play in addressing climate change, he’s certainly aware of it now. “We will leave a great legacy for having taken action while we could for addressing climate change and doing it in a way that we’ve created some fantastic jobs—high paying jobs—jobs here in our own backyard.”

This article/video was originally published by the U.S. Department of Energy.